"You're all just amateurs. Hurry up and die already!"
―Negataros' words when he is about to battle Den-O[src]

Following the events of Kamen Rider Den-O, Negataros (ネガタロス, Negatarosu) and a select few Imagin are stray Imagin who evaded the fate of the other evil Imagin when Kai ceased to exist in the final episode. Soon afterward, he steals an extra Rider Pass before arriving to restore the future where the Imagin exist by recruiting mobsters and members of the Fangire Race to his aid. In Climax Deka, Negataros had to deal with both the DenLiner Police (デンライナー署, Denrainā Sho) led by Ryotaro Nogami, an inside man in the form of Yuto Sakurai, further worsened by the brief meddling of Wataru Kurenai.

In the end, Negataros' plan is foiled and his armor is destroyed by the Double Boistous Kick & Darkness Moon Break of Den-O Climax Form & Kiva before he finally meets his end in a battle against the DenLiner, the ZeroLiner, and Castle Doran.

Negataros is also featured prominently in the S.I.C in Hyper Hobby Magazine. The story is a retelling of the events of Climax Deka featuring Negataros traveling to April 3, 1971, to team up with the Shocker organization and combating Den-O and the Tarōs along the way.

Kamen Rider Nega Den-O appears as a toy, when Sento and Sougo find Ataru he brings them to his room which is filled with Kamen Rider memorabilia, with Sougo and Sento stunned to see toys of themselves. Ataru reveals that Kamen Riders are fictional. Kamen Rider Heisei Generations FOREVER

Kamen Rider Nega Den-O appears cited as an example of the riders that portrayed the Suit Actor Jiro Okamoto with Caucasus, Ryuga, Odin, G4, Leangle and Black later he does not appear in the quiz with the other Riders. That One! Jiro Okamoto: Final Blow Diet!!

Negataros made a briefly appereance amoung other Den-O characters in posters and image. Petition! Deneb Wants a Soft Vinyl Toy Too!!

Kamen Rider Nega Den-O appears in the video game with the others Kamen Riders of the Heisei Era,in Kamen Rider Climax Heroes OOO.

Kamen Rider Nega Den-O in the video game with the others Kamen Riders of the Heisei Era,in Kamen Rider Climax Heroes Fourze.

Kamen Rider Nega Den-O is an playable character with the other Kamen Riders in Super Climax Heroes.

Kamen Rider Nega Den-O and Negataros appears as a playable character with the other Heisei and Showa kamen Riders in Kamen Rider Riderbout. 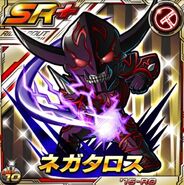 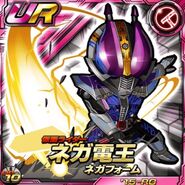 Kamen Rider Nega Den-O appears as a playable character and boss in this crossover videogame he had a Long-range normal attacks are low and hatch quickly, so they can be used frequently as restraint attacks.

Kamen Rider Nega Den-O appears as a playable character with other Riders and monsters in Kamen Rider Break Joker.

Kamen Rider Nega Den-O appears as a playable character with others Kamen Riders in the video game, performer his Nega Wild Shot against his enemies Kamen Rider Transcend Heroes.

Masked Rider Expansion cardNegataros as Kamen Rider Nega Den-O appears as a playable character in this trading card game with other Kamen Riders of Heisei-Era , Showa-Era, Super Sentai, Metal Heroes and other Heroes.

A cocky and arrogant Imagin, Negataros shares a few similarities with Momotaros aside from looks and appearances. They are both quite confident of themselves and are quite eager for a fight. Unlike Momotaros though, Negataros was an evil Imagin who showed no desire to protect the timeline or innocent people but instead to destroy the current timeline while willing to murder countless innocent people to do so.

Even though Negataros can only transform into one form which closely resembles Den-O's Sword Form, his powers seemingly exceed all of Den-O's basic Form and possibly even Climax Form as well. This is hinted when he managed to survive being struck by a double Rider Kick from Kiva in Kivat Form and Den-O in Climax Form and instead of being defeated only lost his Rider Form without (seemingly) being seriously injured.

Even when confronted by the DenLiner, ZeroLiner and Castle Doran, Negataros managed to somewhat hold his own with the Nega DenLiner until he was ultimately defeated proving how skilled he is at using it.

By swiping a Rider Pass across the SetTouch, Negataros is able to transform into Nega Den-O. Unlike Den-O though, because the user is an Imagin, Nega Den-O bypasses the Plat Form to assume his only fighting form (although a glimpse of Plat Form is briefly seen while transforming). Though he has no other fighting forms equivalent to Rod Form, Ax Form or Gun Form, Nega Den-O can use their equivalent Nega DenGasher weapon modes in battle.

Nega Form (ネガフォーム, Nega Fōmu) is Nega Den-O's only fighting form. It is visually similar to Den-O Sword Form, but is a deep shade of purple as opposed to red and has teal tribal markings all over the armor. As with Den-O Sword Form, it is based on the story of Momotarō, the Peach Boy.

The armor met its end at the hands of Den-O Climax Form and Kiva's Double Rider Kick.

This Rider Ring which bears the likeness of Imagin Negataros is exclusive to Kamen Rider Wizard's Wizard Ring toyline. When used by a Wizardriver wearer, it would be able to summon Negataros.

and later played the voiced Kazemi

Negataros concept art
Add a photo to this gallery

Nega Den-O's suit used in outdoor attractions and stage shows.
Add a photo to this gallery

Retrieved from "https://kamenrider.fandom.com/wiki/Negataros?oldid=683548"
Community content is available under CC-BY-SA unless otherwise noted.