The Invasion of Leawood

Jennifer Tung (US footage)
Atsuko Takahata (Japanese footage)
A human-looking female in black-and-red armor. Nefaria uses the yellow feather on her helmet as a weapon or to write messages. She hardly goes into battle and is often seen on Earth giving commands. Nefaria has sometimes flirted with Dregon, but she's often ignored. Sometimes, Nefaria accompanies any monster in the Supernatural category. Nefaria has direct command of the Maggots, a trio of insectoid monsters that serve her, she is mocked by her fellow generals whenever the Maggots fail their missions. Her eyes regularly glow bright red, and she has an extremely sinister laugh. 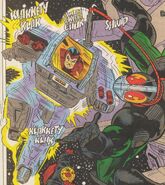 Wielding the Battlesuit against Dex.