Nazo Toki Labyrinth (ナゾトキラビリンス, Nazo Toki Rabirinsu) is a game created by former Genm Corp. CEO Kuroto Dan, one of the few game not to be the source of a Rider Gashat. A mystery game where players solve riddles and mysteries in a mansion, ostensibly to rescue Poppy Pipopapo, the imprisoned Dan created this game to challenge Emu Hojo and Parado.

In reality, it was implied that the game was programmed to allow Kuroto to break free from his prison, upon Emu and Parado winning the game. Kamen Rider Ex-Aid "Tricks": Kamen Rider Para-DX

Entering the Game World, Emu and Parado found themselves equipped with Gamer Drivers and a blank Gashat for each. The two went on separate ways to determine who will solve the mysteries faster and encounter different mystery rooms as they solve the riddle quickly:

Exiting their respective rooms, they finally regrouped to solve the last mystery in the form of a star-labelled room. The final riddle unveils itself as Hatena Bugster. While finding himself incapable of fighting with blank Gashats, Emu and Parado's gratitude towards each other brought forth the Knock Out Fighter 2 Gashat as they use it and transform into Level 39 of their Rider forms. Remembering their previous riddles and their thanks, the two finally solved it by punching the numbers 3 and 9, making up the wordplay Sankyū (さんきゅうー, Sankyū) (hononym for "Thank you") as Hatena congratulated them.

With the fight over, the two stumbled upon an empty room and immediately won the game despite Poppy being nowhere to be found. As they exited the game, Poppy reprimanded them for leaving her behind before she quickly assuming that Kuroto was testing their bonds. Before they could properly thank the Game Master, the three were shocked to discover that Kuroto had escaped custody. Kamen Rider Ex-Aid "Tricks": Kamen Rider Para-DX

Hatena Bugster is a Bugster born from the data of Nazo Toki Labyrinth. 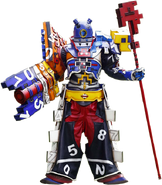 Hatena Bugster
Add a photo to this gallery

Retrieved from "https://kamenrider.fandom.com/wiki/Nazo_Toki_Labyrinth?oldid=628250"
Community content is available under CC-BY-SA unless otherwise noted.