For the A. R. World version, see Haruka Miwa.

During an office job, Natsumi Miwa is refused a promotion by her boss and resigns. Later, while out walking, Natsumi is attacked by the Peacock Undead. Meanwhile, a mysterious figure watches the assault and starts to approach her. Later Shin Magaki bumps into a fleeing Natsumi, and both start running from the Undead. Natsumi and Shin continue running from the Undead.

Natsumi finds a steel pipe and tries to get Shin to cover her escape claiming that men are supposed to protect women. This fails and the Undead continues chasing them until an explosion destroys it. The mysterious figure approaches them, no longer hiding and throws them both Change Kerberos Rouse Cards. He then returns back to human form.

Junichi offers them both to be Kamen Riders. He also explains that the incident with the Undead ended once, but the power of the Kamen Riders is needed again. Natsumi and Shin refuse and give back the cards. Junichi says to himself that they will return, and that it is their fate is to become Riders. Behind Junichi is Kazuma Kenzaki, who becomes a garbageman. Natsumi and Shin walk away, with images of their Rider forms being shown.

In the movie, she is the replacement of Kamen Rider Chalice for the team's long range fighter, she is armed with the L'arc Rouzer, a crossbow. Her weapon is based on the Garren Rouser and the Chalice Arrow. Her primary finisher is Ray Bullet, a supercharged energy arrow. Upon Kenzaki and Mutsuki regaining their respective belts as Blade and Leangle, Miwa and Magaki have grown jealous against them. Attempting to gain more power, obtains the King Category Club card from the dying Shin Magaki, and later she steals the remaining King Category cards from Junichi, until she was killed by the Albino Joker, who is actually Junichi Shimura in shadow, leaving the Four card in her hand.

After his death. Kotaro reveals to everyone that Junichi himself is the Albino Joker as both of his victims Natsumi and Shin hold the cards 4 and Jack (both of which are a pun of his name (i.e. "Jack" and "Shi")).

Kamen Rider Rider Larc make a appearance with other Riders and kaijin monsters,when Shinnosuke and Kiriko discover the knock-off versions of the Televi-Kun ,an abandoned warehouse after they meet Roidmude 027

When Natsumi comments on the absence of female Riders, to which Daiki rebutts that there have been female Riders before,Kamen Rider Larc is cited as an example of a female Rider by Daiki Kaito,Natsumi replies with more insatisfaction at the short precedent of female Riders, upon which Kamen Rider Stronger bursts into the room with a picture of Electronic Wave Humanoid Tackle in his hands.

Kamen Rider Larc appears as a playable character in this video game.

Kamen Rider Larc appears as a playable character with the other Heisei and Showa kamen Riders in Kamen Rider Riderbout. 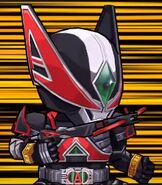 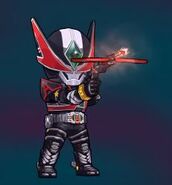 Kamen Rider Larc appears as a playable character in this trading card game with other Kamen Rider Kamen Rider Heisei-Era , Showa-Era,super sentai,Metal Heroes and other Heroes.

Her fighting style as seen in the movie is balanced in melee fights and and in kicks against her opponent.

Retrieved from "https://kamenrider.fandom.com/wiki/Natsumi_Miwa?oldid=653394"
Community content is available under CC-BY-SA unless otherwise noted.