She is a mysterious girl that fell from the sky and fell into Gentaro's arms and heart during Amanogawa High School's culture festival. She is rather quiet and observant, usually only repeating only what others say. Nadeshiko had grown close and fond of Gentaro during all the time they spent together. When Zodiarts attacked and Gentaro became Kamen Rider Fourze, Nadeshiko assumed her own Rider form, which shocked Gentaro.

In a fight with the Horoscopes Virgo Zodiarts, the two Riders drove her off with a combination attack. However, it is later revealed that Nadeshiko is not human, she is actually the human form of a substance known as SOLU that copied the appearance of the real Nadeshiko Misaki, and had demonstrated this by taking off her helmet to show she can withstand the vacuum of space. She also created the Mega Burgermeal after looking at the original one, who was cautiously looking at her.

The Rider Club made Nadeshiko turn back into SOLU and handed her to Foundation X without realizing that they were looking for her. Nadeshiko escapes thanks to Gentaro, who knows that Nadeshiko isn't human, but would like to pursue a relationship. However, Foundation X was not leaving without the SOLU, and attacked Nadeshiko and Gentaro, both of which transform into their Rider forms. In the chaos, Nadeshiko gets captured and is turned back into plain SOLU by Lem Kannagi. She is turned into the SOLU Switch for Kannagi to become the Super GingaOh.

In her final moments as a corporeal being, however, she creates the Rocket Super-1 Switch for Gentaro, which allowed him to use Rocketstates to finish off the Dragon Mutamit.

During the fight with the Super GingaOh in Earth's orbit on the Exodus, Nadeshiko's feelings for Gentaro allowed him and Kamen Rider OOO to defeat the Super GingaOh by keeping the monster from damaging Fourze when he made the fatal mistake of using an attack fueled by the SOLU Switch, and actually increased Gentaro's power.

At the end, she and Gentaro have one final moment together in Gentaro's mind, before she leaves as a sentient energy being with no physical form. At a train station, Gentaro sees the real Nadeshiko but she doesn't notice him but was cheered up by the Kamen Rider Club.

In the final minutes in the stage, she made a brief appearance among Sagittarius Zodiarts Nova Form, accompanying Dark Yuki a few minutes before leaving, she says goodbye to Gentaro.「Kamen Rider Fourze: Final Stage」

5 years after Fourze's main events finished, Nadeshiko returns to Earth when Yuki was nearly killed from her spaceship's destruction and aids Gentaro and Wizard, as well as the Riders before them, in Movie War Ultimatum. Nadeshiko was riding Accel in his BikeForm in Movie War Ultimatum. After the battle with the Akumaizer, she returns to space as XVII brought her along.

Kamen Rider Nadeshiko appears to buy a bamboo seller in the mobile store of the Shocker Leader for 1000 yens. But in reality, the Shocker Leader made a scam when she buys the bamboo, where she learns that the price is actually 58.000 tens. Nadeshiko rejects the sale but still falls into the trap when the Shocker Leader explained to her that it is not a scam and finally tells her that her apron does not fit her.「Kamen Rider × Super Sentai × Space Sheriff: Super Hero Taisen Otsu: Heroo! Answers」

Nadeshiko is an unlockable playable character in the game, making her debut in this third entry of the Rider Generation handheld game series in All Kamen Rider: Rider Revolution.

Kamen Rider Nadeshiko appears as a playable character in this video game.

Kamen Rider Nadeshiko is a playable character with others Kamen Riders of Neo-Heisei era in the Video game.

Kamen Rider Nadeshiko appears as a playable character with the other Heisei and Showa kamen Riders in Kamen Rider Riderbout.

Kamen Rider Nadeshiko appears as a playable character with other Riders and monsters in Kamen Rider Break Joker.

Kamen Rider Nadeshiko appears as a playable character in Kamen Rider Batton-Line among other Riders in the game.

Kamen Rider Nadeshiko appears with other Kamen Riders and Monters of Heisei and Showa Era in Battle Spirits. 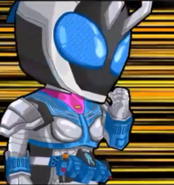 As a living mass of SOLU, Nadeshiko can copy the appearance and functions of things and sometimes improve them. Seeing Gentaro become Fourze, Nadeshiko became Kamen Rider Nadeshiko in order to fight with him. Her Rider Kick is called the Nadeshiko Rocket Kick (なでしこロケットキック, Nadeshiko Roketto Kikku), which is a heel kick propelled by the Rocket Switch. She can also perform the Double Rider Rocket Punch (ダブルライダーロケットパンチ, Daburu Raidā Roketto Panchi) with Fourze [1].