The Magnet Switch Carrying NS-MagPhone (マグネットスイッチ携帯 ＮＳマグフォン, Magunetto Suitchi Keitai Enu Esu Magufon) has two functions. It can be split into N Magnet Switch and S Magnet Switch, and inserted it into the Fourze Driver to access Magnetstates. When inserted in the Driver, they are used as joysticks to control the Magnet Cannon Modules. When both parts are attached, it can be used as a phone.

It's also an important part of the two Magnet Switches, because without it, Fourze can't access Magnetstates and only access the Magnet Modules, which are uncontrollable. In terms of Fourze's gear, only the MagPhone serves as a second "transformation" device for Gentaro to achieve a new States.

Gentaro had asked rookie Kamen Rider Club member Ryusei to lighten Kengo's load at the Rabbit Hatch by helping out with the adjustment of the Magnet Astro Switches. Ryusei mistakenly declares the switches ready-for-use, much to Kengo's protest. Tachibana discovers the error in the process and secretly provides Ryusei with the schematics for a controller device, which will suppress the magnet switches to the degree of being usable. Kengo is jealous that Gentaro would entrust his work to a rookie. Ryusei goes ahead and builds the NS-MagPhone and again declares it ready. However, the device won't work (it won't divide in two), much to Ryusei and the club's shock. Kengo was still upset that Magphone wasn't finished yet. When Ryusei confronts Kengo to fix things with Gentaro (using magnets as a metaphor), Kengo realizes what adjustments have to be made with the phone. Once successful, Fourze was able to achieve Magnetstates. 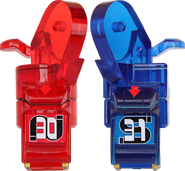