Rumors circulate of savage ape-men in the Omi Mountains, but this is a cover for training Destron's Ranger Squad units. In order to keep this secret Mantis-Merang kills anyone who approaches the area. V3 saves Rider Scout Kenji and his older brother from certain death, but the Destron Rangers soon surround them. Meanwhile, the 2nd Unit of the Destron Rangers starts tainting Tokyo's water supply with the deadly Mummification Virus. 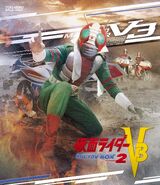 Retrieved from "https://kamenrider.fandom.com/wiki/Mysterious!!_The_Destron_Ranger_Corps?oldid=619777"
Community content is available under CC-BY-SA unless otherwise noted.