For the A. R. World version or Kamen Rider Leangle 300 years after, see Mutsuki Kuroha and Satsuki.

He is a troubled teenage high school student who was selected to become Leangle by the evil will of the Spider Undead (Category Ace of Clubs). There was an instance, however, when Go Kiryu, the initial candidate to become Kamen Rider Garren, took it from him and, with the will of the Spider Undead's parasite spiders, used the system to assault Kamen Riders Blade and Chalice. Although initially afraid of the dark when fighting the Mole Undead, Mutsuki overcame his fear when he saw the smiles on the peoples' faces he rescued.

Unlike Kamen Riders Blade and Garren, the first BOARD-created Riders, he gets no Jack form mainly because of a lack of a Rouse Absorber but unseals other Undead to aid him, especially in the battle against the Keroberos Undead. This ability was removed from him when Joker was the only remaining Undead.

Mutsuki's high-class Undead seem to be the kindest of all the high-class Royals. His Category King is a pacifist, his Category Queen has a strong sense of honor and loyalty (and even has developed feelings for him), and his Category Jack is really laid back, and sometimes lazy, only fighting to defend himself. All of them tend not to fight unless it was necessary. And with the help of his Category King and Queen, only then he is able to suppress the power of the Spider Undead and properly seal him. Mutsuki's girlfriend Nozomi provided a significant amount of help as well; though she couldn't assist with fully suppressing the Spider Undead's power, her love for Mutsuki enabled him to at least partially resist the mind control over the course of the series.

Mutsuki was able to figure out that Kamen Rider Chalice is really the 53rd Undead: Joker Undead and that he will become the strongest enemy when the rest of the Undead are sealed. In episode 31, he says to Garren that he will defeat him before that happens. Mutsuki at one time had all of Kamen Rider Chalice's sealed cards because of the Category King Caucacus Undead (in episode 35, he uses Chalices Spinning Dance to defeat the Jellyfish Undead). He tells Mutsuki that he should stop caring for his girlfriend if he really wanted to become stronger. He continued being controlled by the darkness of the Category Ace until episode 42 when he sealed the Tiger Undead who now encourages him to fight only for the sake of others.

Eventually, when Kazuma is not able to defeat Joker/Hajime, Mutsuki decided that it was he who would seal the Joker. He battled Joker with all his might and despite that, he lost the battle. He was last seen with his girlfriend playing some basketball.

Mutsuki as Kamen Rider Leangle appears in the archive footage among other main Rider. He is viewed briefly while using his finisher, Blizzard Clash

Mutsuki and Tachibana appears as witness in the battle Kenzaki against Fake Blade. He is confused to the reason for why are there two Kenzakis. Mutsuki made the try to attack the impostor using his Leangle Rouzer in his Human form, but ends up hitting the real one by mistake. Also, he viewed on how Tachibana made the same error.

Due to Hajime's unexpected help to differentiate to the two Blades, he and Tachibana give their Rouse cards and they were surprised because the Kenzaki Jack Form and King Form are viewed the same time. Mutsuki and Tachibana view how the real Blade destroyed the imitation and later made a little discussion with Tachibana with what card Kenzaki help first. 「Kamen Rider Blade: Blade vs. Blade」

Mutsuki Kamijo returned as Kamen Rider Leangle, teaming up with Sakuya Tachibana and Hajime Aikawa, as well as the rest of the Kamen Riders.

Leangle was also part of a group of reinforcement riders led by Akira Date/Kamen Rider Birth to aid the primary riders in defeating the Rock Great Leader. All the Kamen Riders got on their bikes and performed the All Rider Break attack which destroyed the Great Leader. 「OOO, Den-O, All Riders: Let's Go Kamen Riders」

When the history is changed, Mutsuki becomes one of the brainwashed Riders leading Shocker members.

But later, Mutsuki, alongside Sakuya, Hajime, and Kenzaki, aided the riders against Shocker after they despise how Shocker act and also had themselves free from brainwashing after Takeshi Hongo alongside Hayato Ichimonji broke free from Shocker Tower.

Unfortunately, Leangle was among the Riders whose existence was erased by the Rider Robo. This fate, however, was rendered moot when the Rider Robo was finally destroyed by Shurikenjin Tridoron

Kamen Rider Leangle appears as a toy, when Sento Kiryu and Sougo Tokiwa they find Ataru Hisanagahe brings them to his room which is filled with Kamen Rider memorabilia, with Sougo and Sento stunned to see toys of themselves. Ataru reveals that Kamen Riders are fictional.「Kamen Rider Heisei Generations FOREVER」

Kamen Rider Leangle appears with Ouja, Caucasus, IXA, and Black, cited as examples of the costumes Eitoku used. Later in the beginning of the questionnaire when Kenichi asks which Rider is Jiro referring to five Riders, it is finally discovered that it is Black.

Kamen Rider Leangle, along with Blade, Garren, Chalice, and Undeads are playable in the Kamen Rider Blade video game.

Mutsuki Kamijo as Kamen Rider Leangle, appeared as an unlockable character in this game. His Rouses combos are used in All Kamen Rider: Rider Revolution.

Kamen Rider Leangle is an unlockable and playable character with the other Kamen Riders in Super Climax Heroes.

Kamen Rider Leangle appears as a playable character in Kamen Rider Batton-Line among other Riders in the game.

Kamen Rider Leangle appears as a playable character with the other Heisei and Showa Kamen Riders in Kamen Rider Riderbout. 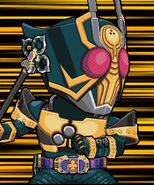 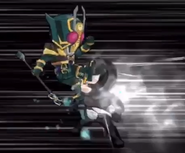 Kamen Rider Leangle appears as a playable character with others Kamen Riders in the video game, performing his Rouse Combos against his enemies in Kamen Rider Transcend Heroes.

Kamen Rider Leangle appears with other Kamen Riders and Monsters in Battle Spirits.

Mutsuki was introduced as an aloof and cowardly individual. However, his personality started to change after his encounter with the Spider Undead. The first time Mutsuki able to become Leangle, he was blinded by its strength and feared to use it after he realized that he injured innocent people. When Sakuya learned about Mutsuki's personality and that he was the only person capable of being Leangle, Sakuya trained Mutsuki to sharpen his fighting instinct. Mutsuki trained hard and improved greatly under his tutelage.

Mutsuki was initially able to surpass Spider Undead's evil will thanks to Sakuya, but when he saw how the others become better than him, the evil will of the Spider Undead managed to corrupt Mutsuki. Despite being corrupted, Mutsuki still held a little remaining humanity, such as trying his best to not let his girlfriend get hurt.

After being freed from Spider Undead's evil will, Mutsuki showed his true maturity towards everyone and was able to accept the friendship with the Undead who didn't want destruction. This even led Mutsuki to cooperate with Undead during fights.

Mutsuki is a melee mid range fighter. After he was trained by Sakuya, Mutsuki's main strength was his instinct. Despite Mutsuki's great wit, he was never able to surpass the stronger enemy due the lack of will like Kenzaki and Sakuya as he is still doubting his strength. This will is soon matured well after he had been freed from the Spider Undead's control.

Different than any previous Leangle's users, Mutsuki does not control Undead by the force of the will, but his reliance and willingness to cooperate, shown only once in the show. In previous instances, he was under the control of the Spider Undead.

The Leangle system was developed through tricks and manipulation by Isaka, the Peacock Undead, who needed the sealed Spider Undead to complete it. However, as later revealed, the Undead was not sealed properly and thus manipulated his users for his own agenda. For Mutsuki to change into Leangle, he has to insert the sealed ♣A: Change Spider card into his Leangle Buckle and position his buckle in front of his waist. The belt then expands automatically around his waist. Mutsuki makes a motion with his right hand across his face and says "Henshin!", then manually opens a portion of his buckle. The buckle announces "Open Up!" at this point. This would also cause a violet projection with a spider image to come out before him. Unlike Blade and Garren's method of transformation (running into their projections), Mutsuki's projection comes to him and completes his transformation into Leangle.

While never assumed in the series, Leangle's Jack Form (ジャックフォーム, Jakku Fōmu) can be seen in the manga and S.I.C. toyline. Leangle would theoretically assume this form by inserting the Absorb Tiger Rouse Card into the Rouse Absorber and scanning the Fusion Elephant Rouse Card. Unlike other Jack Forms, this form is not as maneuverable and lacks the ability to fly, but it compensates with superior strength and defensive abilities.

The Spider Undead is able to shoot webs from his mouth to immobilize his victims, drain the lifeforce of others, and spawn golden spiders to seek out and latch onto ideal hosts. While in the form of an improperly sealed Rouse Card, he can control the wielder.

This form is exclusive to Blade Episode 42

The Evolution Tarantula (エボルーショントランチュラ, Evorushon Toranchura) is the result of the sealed Hikaru Jō and Noboru Shima seizing control of Leangle from the Spider Undead after it attempted to transform into King Form with Garren's Rouse Absorber. In the ensuing battle against the Spider Undead, who was expelled from Mutsuki's body, Mutsuki morphed between his human form and Shima's Undead form. This form, along with Blade's assistance, allowed Mutsuki to defeat the Spider Undead and properly seal it.

This form is exclusive to Blade Episode 42

"I am the strongest!"