The Museum (ミュージアム, Myūjiamu) was a secret organization in Futo City headed by the Sonozaki Family and the main distributors of the Gaia Memories. They distribute the Gaia Memories so that they can be studied and use the data for the Gaia Impact. There were also a few other cults affiliated to the museum assisting in Dopant and Gaia Memory related activities, such as Shinkuro Isaka and Foundation X. 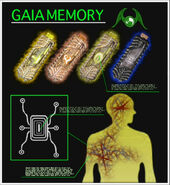 The Museum and their Dopants, represented by the Terror Dopant, were among the various evil organizations and monster races which were allied with Shocker in an alternate timeline where they conquered the world thanks to the Shocker Greeed. OOO, Den-O, All Riders: Let's Go Kamen Riders

Retrieved from "https://kamenrider.fandom.com/wiki/Museum?oldid=503499"
Community content is available under CC-BY-SA unless otherwise noted.