Mission: Ken's Life (使・命・賢・命, Shin・Mei・Ken・Mei) is the twelfth episode of Kamen Rider Fourze. It is the concluding part of the Pyxis arc, ending with Kengo finally accepting the Kamen Rider Club.

The Pyxis Zodiarts decides the only way to get revenge is to use his power to kill all the girls who rejected him, including Miu, by driving a bus with them all inside off of a bridge. Meanwhile, Kengo is still trapped in the rabbit Hatch.

After Kamen Rider Fourze assumes Firestates to extinguish the locker fire, the Pyxis Zodiarts discourages any retaliation from Kamen Rider Fourze as he reverts back to Makise and tells Yuki that he never wants to see her again, while mentioning that there are other stars he loves to see as he walks off. After an attempt to use the Powerdizer's Tower Mode to reach the Moon, Kamen Rider Fourze receives a call from a furious Kengo as he snaps and tears down the Kamen Rider Club banner out of fear of dying alone in the Rabbit Hatch.

As Tomoko leaves the group on a hunch, JK contacts the gang about his finding at the astronomy club. As Gentaro and Shun meet up with JK, Yuki attempts to ask Mr. Gamou to use his resources to send her to the Moon. Luckily, Miu manages to spirit her away to keep their involvement a secret. While scolding the girl, Miu realizes that Yuki has been acting out of guilt. At the astronomy club, Gentaro learns that Makise is targeting the school's cutest girls, who have all rejected him, and intends to kill them all off by sending a bus with them all in it over an incomplete bridge.

Before they can go to stop him, they are intercepted by the Scorpion Zodiarts who overpowers Kamen Rider Fourze before he turns the tables with Firestates as the Zodiarts is forced to escape for its life. Soon after, upon learning from Yuki that Miu is among Makise's captives, Kamen Rider Fourze arrives to save them as Makise uses his Zodiarts Switch in its Last One state. Kengo is contacted by Yuki as she tells him that Gentaro and the Kamen Rider Club members are concerned for him while they continue to fight in his absence.

Elsewhere, Tomoko discovers that the locker that was destroyed was a fake and that the real gateway was in Mr. Ohsugi's possession the whole time upon discovering the original lie he was told made him keep it due to his love for Sonoda. With this knowledge, Kamen Rider Fourze and the others find Kengo on the Moon's surface as he plants the Kamen Rider Club flag on the Moon, with Kengo finally accepting both the club and Gentaro's friendship. 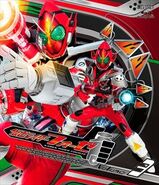 Retrieved from "https://kamenrider.fandom.com/wiki/Mission:_Ken%27s_Life?oldid=619734"
Community content is available under CC-BY-SA unless otherwise noted.