Mighty Creator VRX is a virtual reality action game that allows you to create other games.

When activated, the Gashat reformats the battlefield into a Game Area. When used out of the Gamer Driver by Ex-Aid Creator Gamer, it can be used as a pencil to create weapons and platforms in the Virtual Reality. 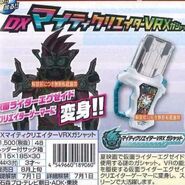 The original scans for the Mighty Creator VRX Gashat.

The opaque plating version Gashat in the film.