Mighty Brothers Double X (マイティブラザーズXX, Maiti Burazāsu Daburu Ekusu), officially titled as Mighty Brothers XX, is a co-op 3D action-platformer video game. Unlike the other Gashats made by Genm Corp, this game and its conceptualization and ideas were created by Emu Hojo. It also served as the basis for the Mighty Brothers XX Gashat.

It is seemingly considered an "unofficial" sequel to Mighty Action X, due to Kuroto Dan's refusal to acknowledge this game, labeling it as a "bootleg."

Emu, when he was a child, was the original creator of the game concept for Mighty Brothers XX. He created a drawing of an orange and green hero, designed gameplay mechanics on notes and would send it to Kuroto Dan in a fan letter. Unknown to Emu, Kuroto hated the fan letter as he realized that there were other people out there in the world that had his level of intelligence. Christmas Special: Targeting the Silver X mas! Engineered History!

The Double Action Gamer was realized when Genomes forced Kuroto Dan's Proto Mighty Action X Gashat into Emu's Gamer Driver, causing Emu to momentarily explode in a light. However, Emu returned with Dan's Gashat as well as his own Mighty Action X Gashat, combining to form the Mighty Brothers XX Gashat. Emu transformed using the new Gashat and defeats Genomes. But upon detransforming, the Gashat split back into their respective Gashats, and Emu lost his memories of transforming using the Gashat in the first place. Kamen Rider Heisei Generations: Dr. Pac-Man vs. Ex-Aid & Ghost with Legend Rider

Later, Emu is approached by Parado after the death of Kiriya Kujo, who tells him to show him that he can change fate. Emu would insert a dual-slot blank Gashat given to him by Parado, infecting him with lethal amounts of the Bugster Virus. But to everyone's surprise, including Kuroto's, Emu spawns a permanent version of the Mighty Brothers XX Gashat and transforms. He would later transform into his Level 20 form, splitting into two bodies. Defined Destiny

After transforming, the 2 Ex-Aids begin arguing over who is who: the Orange one claiming to be M, while the Azure claims to be Emu. This infighting results in the Bugster and Genm escaping. After powering down and re-merging into a single being, Emu is stricken by a piercing headache and faints.

While Hiiro performs a complex operation to remove the cancer from their patient, Emu distracts the Aranbura Bugster, only to be attacked by Genn, who intends to destroy the 'bootleg' game. Emu has finally realized the power of the Mighty Brothers; his two personalities have split. The Orange side, known as Level XX R is the hot-tempered gamer in him, while the Azure, Level XX L, is the cool, patient concerned doctor. In order to use this Gashat, both sides accept who they are and use Super-CoOp-Gameplay to defeat the Bugster. We're Kamen Riders!

Facing the Level 5 Revol Bugster that had emerged from Nico Saiba, Ex-Aid found that the hits he inflicted in the Double Action Gamer Level X strangely had no effect on his Bugster opponent, with Asuna Karino later reasoning that being the source of Nico's stress, and therefore an ally of the Bugster, was the cause. Ex-Aid was then confronted by Dan, who vowed to eliminate Emu's "bootleg" game. Splitting up into the Level XX R and L, Ex-Aid proved a match for Genm Zombie Gamer, forcing him to retreat with the Bugster. Though failing to terminate Emu's "bootleg", Dan was able to determine through the resulting fight data that Mighty Brothers XX did indeed equal the power of Level X, with the twin Double Action Gamers adding that up to "Level XX". A New Challenger Appears!

The Paradox Who Defeated M

When Kuroto Dan reveals to Emu that he has the Bugster Virus, said virus broke out and Emu's personality changed entirely into that of M. The Truth Exposed During the time the virus had broken out, Emu did not use Mighty Brothers XX. It is unknown if this is coincidence, or if he was unable to. A Sudden Fantasy!? After recovering from the virus, Emu was reluctant to use Mighty Brothers XX, fearing his virus would break out again, but some brutal words from Taiga motivated him to do so. Emu assumed Ex-Aid Double Action Gamer Level XX against Genm Zombie Gamer Level X and the Vernier Bugster. After the Bugster was defeated by Snipe Simulation Gamer Level 50, the Double Action Gamers beat back Genm with a Critical Finish utilizing two Gashacon Key Slashers. Take Off Against the Direction of the Wind!

After having used it to care for Kuroto Dan and defeat his Bugster, Kuroto revealed that this had been his plot to retrieve data from the Charlie Bugster for Kamen Rider Chronicle. Emu used Double Action Gamer Level XX to combat Genm Zombie Gamer Level X, but was defeated easily and his Gamer Driver was destroyed. Engineered History!

Hiiro pointed to Mighty Brothers XX to prove that Emu had the power to complete Maximum Mighty X, inspiring Emu to do so. To The Max, Dead or Alive!

to get away only to be left at a disadvantage as he was unable to split into Level XX due to his Rider Gauge running low. However, by eluding the Amazons long enough, Ex-Aid was able to reach a Reverse Energy Item which had the effect of revitalizing Ex-Aid while weakening the Amazon Riders, allowing the Double Action Gamer to quickly defeat the trio by stomping on them. Soon after, Ex-Aid was attacked by a trio of Dark Riders consisting of Dark Kabuto, Dark Drive, and Dark Ghost, but ultimately overcame them as well. Kamen Rider × Super Sentai: Chou Super Hero Taisen

while facing a trio of Bugsters from Neironzu, Ex-Aid assumed the Double Action Gamer, splitting in two to even the odds. Taking out their swords, the XX Ex-Aid duo met the Bugster trio in a skirmish alongside Shishi Red, with L and R respectively wielding the Gashacon Breaker and Gashacon Key Slasher against Level 40 Bugsters Gatton and Kaiden while Shishi Red handled the Level 20 Motors Bugster. The fight was soon ended when Motors' Level 40 fellows disengaged and left, leaving him to be defeated by the three heroes' triple slash, freeing his human host. Go Together, Embracing Your Ambitions!

Possessing Emu's body, Parado initiated a transformation to Double Action Gamer Level XX which led to a confrontation between Emu as XX L and Parado as XX R only for the former to be unwilling to fight even when Parado handed him the Gashacon Key Slasher and Maximum Mighty X Gashat. Eventually, however, Parado provoked Emu into the fight by daring him to cure himself by defeating him. Having relinquished his weapons, Parado was soon beaten by Emu, who struck him with a Maximum Mighty Critical Finish. Emu's human genes were then fused together with Parado, allowing the latter to use the Gamer Driver with his Gashat Gear Dual to level up to Level 99 while Emu also lost his "Genius Gamer" persona for trying to separate Parado while the two were still technically one through the Mighty Brothers XX Gashat. We're Me!?

After Parado was seemingly killed in battle against Ex-Aid Muteki Gamer Goodbye Me!, Mighty Brothers XX would be used to revive Parado so the two could fight together against Kamen Rider Cronus. In the battle, Parado as Kamen Rider Para-DX Perfect Knock Out Gamer Level 99 used Mighty Brothers XX in his Gashacon Parabragun to briefly split into his Puzzle Gamer and Fighter Gamer forms for a combination attack between the two forms. Destiny Reboot! 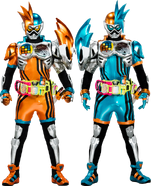 The Futago Bugster are the Bugsters manifested from Mighty Brothers XX.

Futago Busters
Add a photo to this gallery

To activate a finisher, Zi-O must plug a Ridewatch in the Ridewatch Base of RideHeisaber. The finisher's effect depends on both of the plugged Ridewatch and the current DecadeArmor form.

When activated, the Gashat reformats the battlefield into a Game Area.

The first version of the Gashat appeared during Ex-Aid's confrontation with the Genomes, as a result of the fusion between the Mighty Action X Gashat and its prototype counterpart. After Genomes' defeat, the Gashat split back into its respective components.

Later, another blank form Gashat was meant to be Parado's personal Gashat, made by Kuroto using the collected Bugster Viruses. Kuroto needed Parado to collect data by inserting the Gashat into a Bugster in order to complete it, but out of curiosity, Parado decided to give Emu the Gashat instead.

When used in a Gamer Driver, the incomplete Gashat injected Emu with massive amounts of the Bugster Virus. The Gashat could have killed Emu very easily, if not for his natural immunity to the virus. In a bright flash and the data from Emu's body merging with the blank Gashat, it changed into the Mighty Brothers XX Gashat as a result.

Originally this Gashat is the fusion of Mighty Action X Gashat and its prototype counterpart.

Retrieved from "https://kamenrider.fandom.com/wiki/Mighty_Brothers_XX?oldid=685722"
Community content is available under CC-BY-SA unless otherwise noted.