Mighty Action X (マイティアクションX, Maiti Akushon Ekkusu) is a 2D action-platformer video game created by Genm Corp. It is also served as the basis for the Mighty Action X Gashat and well as the two prototypes.

Mighty Action X is a 2D action-platformer game starring a cartoon character named Mighty who uses power-ups to defeat his enemies while traversing through a city landscape with one of the bosses being a villain named Count Salty.

Its concept was envisioned by future Genm Corp. CEO Kuroto Dan as early as 2000. Engineered History! According to Kuroto, the game took 5 years to develop as it was delayed from its intended release in 2011. Many Genm fans waited for its release and gathered at its launch party to play the first working demo of the game, only for the Salty Bugster to ruin the event. I'm a Kamen Rider!

It is later revealed by Kuroto that the development delay of the game was caused by Zero Day, as the prototype of the game along with the other 9 games glitched and created a bug which evolved into the Bugster Virus. It took years to completely debug the first four games and get them and the Rider Gashats their data is based off of working. An Operation Called Dash! 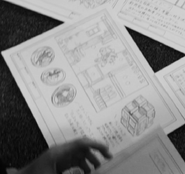 Mighty and Salty concept sketch
Add a photo to this gallery

The Mighty Action game series was already in development since at least the year 2000, when a young Kuroto Dan sent a game still in development known as Mighty Action C (マイティアクションC, Maiti Akushon Shī) to a young Emu Hojo. This version of the game contained the earliest version of the Bugster virus, thus causing Emu to be infected, becoming patient zero of the Bugster virus while giving birth to a being who would later become known as Parado (Kamen Rider Para-DX), a powerful Bugster who also possesses Emu's High Gaming IQ.

Parado
Add a photo to this gallery

Genm Action Gamer Level 2
Add a photo to this gallery 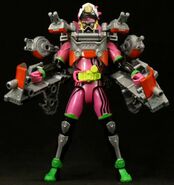 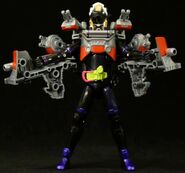 Salty Bugster is a malicious Bugster who takes his likeness as he called himself as Count Salty, having been created from the data of Mighty Action X.

Salty Bugster Level 3
Add a photo to this gallery

When the Gashat is activated, it reformats the battlefield into a Game Area and spawns brick-like boxes around the area, grounded or floating. These boxes can be used as solid platforms for jumping, or be broken for Energy Items. Ex-Aid has demonstrated the ability to make these boxes appear from thin air when he needs to jump higher, but it is unknown if these boxes were already hidden there, or spawned by Ex-Aid himself.

When activated, this Gashat reformats the battlefield into a Game Area and able to spawn brick-like boxes around the area. This Gashat is currently in possession of Kamen Rider Genm. When used in VR, the screen become black and white. According to Hiiro, Proto Mighty Action X was the origin of the Bugsters.

According to Dan and Parado, the usage of the Proto Mighty Action X Gashat and the other prototype Gashats have a side effect that makes the user more insane, losing their morals, and also damaging their bodies with prolonged usage. Taiga suffers from unknown body damage from Zero Day, causing his hair to grey while Dan slowly loses his sanity with his body deteioriating to the point where the latter devised a plan to give him an undying body.

This Gashat was the first Kuroto ever created, and is the alpha version of the original purple Proto Mighty Action X Gashat. It possesses the "Continue" function, allowing its user the ability to revive after death up to 99 times.

When activated, this Gashat generates a unique Game Area which is capable of nullifying most, if not all, of a Bugster's powers.

The Gashat was used as a failsafe for Kuroto Dan should he ever be killed, acting as his "save data".

This mass-produced version of the Mighty Action X Gashat is generally sold by Genm Corp. and is functioned to play the 2D action game "Mighty Action X".

It is known by gamers as "a legendary game that has been discontinued", and its completion was announced in 2016, which has been developed for more than five years of production announcement.

Like its Gashatrophy counterpart, it doesn't possess a handle and a shorter RG Circuit Board.

Sota Suyama would mistake this Gashat for the one that would become Emu Hojo's personal Gashat.

The Gashat seen in the aftermath of the Mighty Action X launch party in Episode 1.

The Gashat plugged into a living room console in Episode 25.

This Gashatrophy (ガシャットロフィー , Gashattorofī) is the reward for defeating Salty in Kamen Rider Chronicle. It was claimed by Ride-Player Nico Saiba. Beyond Your Identity

Mighty Critical Finish (Blade)
Add a photo to this gallery

Nintendo 3DS (eShop Exclusive)
As a means of meta-promotion for the Kamen Rider Ex-Aid series, Bandai Namco created an actual Mighty Action X game for the Nintendo 3DS. The game can be obtained from the Nintendo eShop via a download code from purchasing the game All Kamen Rider: Rider Revolution. The game was co-developed by Seventh Chord and Criware.

Players must traverse across the stage, defeating enemies and utilizing power ups until they reach the end. There are 4 stages in the game plus one bonus stage where players can become the black Mighty from the fictional prototype game.

Retrieved from "https://kamenrider.fandom.com/wiki/Mighty_Action_X?oldid=490765"
Community content is available under CC-BY-SA unless otherwise noted.