Memories, Love, and the Marine Combo

Memories, Love, and the Marine Combo (思い出と恋と海のコンボ, Omoide to Koi to Umi no Konbo) is the twenty-fourth episode of Kamen Rider OOO. It is the debut of Shauta Combo and the imaginary Renai Combo.

As Eiji becomes smitten with the elder Yumi sister, Akira tries to reach out to her sudden obsession with being the most beautiful under her awakened desire.

With Eiji enraptured by Yumi's otherworldly beauty, so much so that he imagines a "Love Combo" for OOO. Date is unaffected as he demands the Yummy Egg before a school of Ei Yummy to cover their escape as Date and Ankh fight the monsters. The next day, as Rei is frantic over location of Yumi in light of the upcoming conference, Hina tends to Eiji's love sickness while Kougami gives Akira the results of his medical check up and current total of Cell Medals while Maki is making upgrades to the Birth CLAWs. At the Aqua Museum Lab for business promotion, Rei is confronted by Yumi as she has the newly hatched Ei-Sai Yummy hold her sister captive so she can take her sister's place as company president. Seeing Yumi on TV, Akira heads to the Cous Coussier to borrow Shintaro as he helps Hina and Ankh snap Eiji out of it.

Akira arrives at the Aqua Museum Lab as Yumi reveals her reasons to Rei of her sudden change of behavior. Akira arrives, revealing he is unaffected by Yumi's beauty as he prefers the old her before reminding her of their time in the Sahara and managing to snap her out of her desire. However, the Ei-Sai Yummy attacks Akira while the Sakura sisters run out of harm's way.

With Shintaro covering him, Akira becomes Kamen Rider Birth and uses the upgraded Drill Arm to take most of the Cell Medals from the Yummy. With the Gamel-element gone, the large Ei Yummy that remained turns into the giant Itomakiei Yummy. By then, Ankh and Hina drag Eiji to the fight before Kazari arrives to bar their path. Eventually, leaving Kazari to wait for them, the two manage to snap Eiji out of the Yummy's spell by having Eiji turn into Kamen Rider OOO to fight the Greeed as the Itomakiei Yummy emerges.

As Eiji reveals he has no memory of being under the Ei-Sai Yummy's influence, Yumi thanks Akira before being taken to the hospital to fully recover. Though Shintaro asks him if he is fine that he and Yumi are parting ways, Akira tells him that he has still got business to take care of. 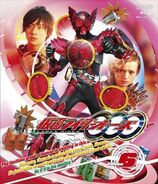 Retrieved from "https://kamenrider.fandom.com/wiki/Memories,_Love,_and_the_Marine_Combo?oldid=491169"
Community content is available under CC-BY-SA unless otherwise noted.