The Melon Defender (メロンディフェンダー, Meron Difendā) is the Armored Rider Arms Weapon granted either by accessing Melon Arms or via the summoning ability of Kiwami Arms. True to its shield design, the Melon Defender can be used to block attacks, thus leaving the opponent wide open. In addition to being a shield, it has sharp curves and a sharp point on the bottom of the shield which allows the Melon Defender to also act as a melee weapon. It can also be thrown towards an opponent and return like a boomerang.

The Melon Defender consists of the following parts: 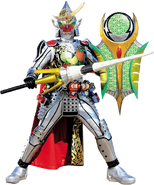 Melon Squash: Melou Blast
Add a photo to this gallery

Retrieved from "https://kamenrider.fandom.com/wiki/Melon_Defender?oldid=582433"
Community content is available under CC-BY-SA unless otherwise noted.