Ryuta Tasaki
Medals, Underwear, and a Mysterious Arm (メダルとパンツと謎の腕, Medaru to Pantsu to Nazo no Ude) is the first episode of Kamen Rider OOO. It reveals how Eiji Hino become OOO, having earlier appeared in Kamen Rider W Forever: A to Z/The Gaia Memories of Fate, as well as introducing the O Medals first foreshadowed in W's antepenultimate episode.

A mysterious arm reawakens the Greeed from their slumber and decides to use Eiji Hino, a cheerful wanderer, as his means of getting back what he desires as Kamen Rider OOO.

Eiji Hino is working as a part-time security guard in the Kougami Art Museum, but he is unknowingly drugged by two thieves posing as fellow security guards who put sleeping pills in his juice. While in the middle of robbing the artifact chamber blind, a mass of coins form into an arm that breaks a seal on a mysterious sarcophagus releasing four monsters. The Kougami Foundation, owners of the museum, send their Ridevendor 1st Squad motorcycle brigade to bomb the museum, intending to trap the monsters known as Greeed inside. However, the Greeed escape, and overpower the squad, while the Kougami Foundation's leader Kousei Kougami decorates a birthday cake, welcoming the Greeed into this world.

Later in the day, a strange red coin hits Eiji in the head, waking him up. Thinking that it is his pay for the day, he takes the coin and changes out of his work clothes down to his underwear, only for the wall behind him to collapse and have several emergency workers behind it. After being questioned by the young police detective Shingo Izumi, Eiji goes on with his life, unaware that he is being followed by a disembodied arm. Upon passing a strange looking vending machine, Eiji decides to get something to drink, and prepares to use the red coin to buy something, but he drops it and it rolls under the machine. While struggling to get the coin himself, a young woman helps Eiji retrieve the coin by lifting the vending machine off of the ground with little effort. However, the disembodied arm appears, scaring off the girl after she gives the coin back to Eiji, while the arm demands it back and chases him. Elsewhere, the Greeed known as Uva approaches a woman in a jewelry store and uses her to make the Kamakiri Yummy, instructing the monster to find Ankh to retrieve the his master's stolen Core Medals from him.

The Kamakiri Yummy eventually finds Ankh, the disembodied arm, with the resulting fight taking detective Izumi as a casualty. Taking Shingo's gun, Eiji uses it to fight the Yummy, who turns his attention to the human for meddling. Ankh, impressed by Eiji's conviction to save him, decides to return the favor, seeing Eiji as a useful asset. Ankh then produces the seal that kept the Greeed in their 800 year slumber, and places it onto Eiji's midsection, transforming it into the OOO Driver belt, much to Eiji's astonishment and apparent confusion. Ankh tells Eiji that if he uses the Medal he found, along with two others that Ankh has, a yellow one and a green one, it will allow Eiji to transform and fight the Yummy. Eiji uses the Medals and the belt to transform into what Ankh calls "OOO". The Kamakiri Yummy attacks him, again, but Eiji as Kamen Rider OOO (Tatoba Combo) is able to counter, using the Toraclaw gauntlets on his arms and his powerful jump kicks before Ankh gives Kamen Rider OOO the Kamakiri Medal to switch with the Tora Medal to become Takakiriba. Using the Kamakiriswords, Kamen Rider OOO destroys the Kamakiri Yummy. Eiji's victory is interrupted when he hears a cell phone ringing, realizing that it is Shingo's. On the other line is the girl Eiji met, Hina Izumi, checking on her brother. Eiji wonders what he should do when Ankh attaches himself to the detective's lifeless body, converting it into a puppet body to act through.

Nearby, Shintaro Goto of the Ridevendor 1st Squad opens up a strange can which transforms into a tiny hawk-like robot as it and several others converge on the two, while elsewhere Kousei Kougami has decorated another birthday cake, one for Kamen Rider OOO. 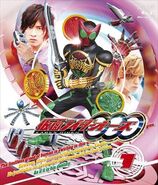