watch 03:27
Wiki Targeted (Entertainment)
Do you like this video?
Play Sound

The Medal System (メダルシステム, Medaru Shisutemu) is a system created by Doctor Kiyoto Maki of the Kougami Foundation, overseen by chairman Kousei Kougami, invented to efficiently use the desire-fuelled O Medals.

Doctor Maki's original Medal System was created to utilize Cell Medals. These included the Candroid robots, the Ride Vendor which could function as both a vending machine to store said Candroids as well as a motorcycle, and the Medajaribur sword which was given to Eiji Hino as a gift when he transformed into the modern day Kamen Rider OOO. This Medal System culminated with the creation of a Rider Driver allowing access to a new Rider System, Kamen Rider Birth, utilizing the Birth Buster weapon as well as in-built Birth CLAWs.

Following Doctor Maki's death, Kougami moved onto a new project, the creation of new Core Medals following the originals created by the first OOO's alchemists 800 years prior. These new Core Medals, however, were created to not birth new Greeeds. 40 years later, a new Driver was created to utilize a trio of new Core Medals, allowing transformation into Kamen Rider Poseidon. Super versions of OOO's Core Medals were also created, and were given to Eiji Hino by Michal Minato when the latter travelled back in time to 2011. Kamen Rider OOO: Ankh's Resurrection, the Medals of the Future, and the Leading Hope 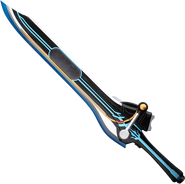 Poseidon Driver
Add a photo to this gallery

Yadokari Medal
Add a photo to this gallery

Super Batta Medal
Add a photo to this gallery
Retrieved from "https://kamenrider.fandom.com/wiki/Medal_System?oldid=633065"
Community content is available under CC-BY-SA unless otherwise noted.