When she learns that Misa died from the creation of Medusa (and that Misa's heart no longer remained, as she had hoped), and that Medusa killed her parents, proven further by Medusa destroying the keychain that Misa gave her to remind her of her family, which is also the one thing that supported Mayu's lonely life, she falls into despair. However, she overcomes her despair and suppresses her inner Phantom much like how Haruto did in the Sabbath. When asked by a baffled Medusa for the reasons she managed to do so, Mayu says that Misa saved her; Mayu seems to have been able to hold on to her hope by remembering Misa saying that she alone decides her beginning and end, refusing to let the monster who destroyed her family destroy her life.

Due to the unusual feat, she is soon contacted by White Wizard and offered to be trained to be a mage like Haruto, which Mayu takes up without hesitation. Afterwards, Mayu and White Wizard teleport away to somewhere, supposedly to begin her training as a magician.

Mayu returns and transforms to face Medusa once again in order to avenge her late family. She later defeats Medusa using the Holy Ring; given by White Wizard in exchange for Haruto's Infinity ring.

She was later asked by Haruto what will she do now. She replies that she will protect people from the Phantoms by hunting them down.

After White Wizard/Fueki was revealed to be Wiseman as well, Mayu becomes one of the targets for one of Fueki's plan for the new Sabbath, thus kidnapped by a brainwashed Yuzuru.

Once the Sabbath is foiled by Beast, later the death of Fueki and Koyomi at the hands of Gremlin, Mayu, along with Yuzuru and Yamamoto joins the fight against Gremlin. When she is about to be killed by an evolved Gremlin due to her long black hair, she is saved by Haruto. After the final battle, she joins a police force under Rinko's guidance.

Mayu, along with Yuzuru and Masahiro arrive to protect Rinko, Kizaki, and Kosuke from the copies of Phantom Carbuncle, However, the Mages were overpowered by the appearance of Phantom Ogre resulting in them being critically wounded. Kamen Rider × Kamen Rider Gaim & Wizard: The Fateful Sengoku Movie Battle

Kamen Rider Mage appears as a playable character with the other Heisei and Showa kamen Riders in Kamen Rider Riderbout. 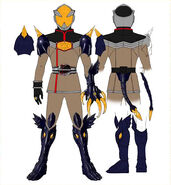 Retrieved from "https://kamenrider.fandom.com/wiki/Mayu_Inamori?oldid=693537"
Community content is available under CC-BY-SA unless otherwise noted.