To The Max, Dead or Alive!

Maximum Gamer is a large, hulking, gray and gold mecha-like suit of armor. It resembles Kamen Rider Ex-Aid Action Gamer Level 2, having similarly designed shoulder pads, shins, and forearm armor, and similarly colored hands and feet. Its face is its chest, giving it a chibi Level 1-like appearance.

When initially summoned, it floats with its limbs folded up, somewhat resembling an ornate head. When Ex-Aid ejects from it, it lacks a Gamer Driver. 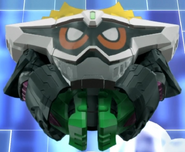 At the climax of the Chou Shocker Taisen, Ex-Aid assumed the Maximum Gamer as he was enlarged

duo against the Big Moraimarz Robo

piloted by Shocker Leader III. With a swing of momentum provided by the club of the Kyurangers' spaceship ORION

In the final battle to stop Kuroto Dan from reviving, Ex-Aid assumed the Maximum Gamer to fight alongside the assembled five Kamen Riders, whom he transformed into the second Kamen Sentai Gorider, to wipe out Dan's Shocker army. Striking the Gorider Ball provided to him by Kaito Kumon/Aka-Rider, Ex-Aid used it to destroy Totema before supporting the Gorider Bazooka to defeat the enhanced Kamen Rider Genm Zombie Gamer. 「Maze 3: Gorider Forever」

Accosted by six Ride-Players as Kamen Rider Chronicle commenced, Ex-Aid assumed the Maximum Gamer to intimidate them into leaving. The Maximum Gamer succeeded in routing all but one stubborn Player who Emu attempted to reason with as he canceled his transformation. 「Start the New Game!」

Stepping in alongside Brave and Snipe to defend the Ride-Players against the Bugsters, Ex-Aid assumed the Maximum Gamer as he confronted Para-DX. Overpowering both Level 50 Puzzle Gamer and Fighter Gamer, Ex-Aid defeated Para-DX with the Maximum Mighty Critical Finish, leading Parado to concede that Ex-Aid was the best before escaping. 「Players Who Bet on Survival」

Having been goaded into imprinting his human DNA onto Parado by striking him with the Maximum Mighty Critical Finish, allowing Para-DX to use a Gamer Driver, Ex-Aid's Maximum Gamer proved to be equally matched against Para-DX's new Level 99 Perfect Knock Out Gamer as they struck each other with a Critical Break and Critical Bomber respectively. 「We're Me!?」

Saving a Ride-Player from the Charlie Bugster, Ex-Aid pursued him with the Maximum Gamer, summoning Kuroto Dan to deal with Parado for him. Though quickly catching up with the Bugster, Ex-Aid was stopped short of finishing him by Ride-Player Nico so she could claim his Gashatrophy. Later, Ex-Aid used the Maximum Gamer to empower his Action Gamer as he fought with Genm Action Gamer Level 0 against Para-DX, retrieving the Dangerous Zombie Gashat. 「The Forbidden Continue!?」

When the Kamen Riders stepped in to save a Ride-Player from the high tier Bugsters, Ex-Aid Maximum Gamer was pitted against Para-DX Perfect Knock Out Gamer and was soon forced to retreat with everyone when fellow Level 50 Riders Snipe and Brave were defeated by the Level 99 Graphite and Lovelica respectively. Ex-Aid would face Para-DX again, this time backed up by Genm Zombie Gamer Level X-0, in what was intended to be the final battle against the high tier Bugsters. By having Genm hold back Para-DX, the Maximum Gamer was able to use his reprogramming ability to remove Lovelica's edge by performing the Maximum Mighty Critical Finish to destroy his Lovely Girls. Ultimately, however, Ex-Aid was effortlessly defeated in an instant alongside all parties when the time-manipulating Kamen Rider Cronus made his appearance. 「Judgment Received!」