He Still Didn't Do It

Masuji alongside a police officer-Type Humagear went on Chiharu Ebii for an investigation regarding a scam of marriage money. He later attacked Bingo Bengoshi, almost succeeding in causing him to reach a negative singularity and become an Ark Magia, until Aruto Hiden intervened and provided cover to let Izu take Bingo elsewhere, fighting the Dynamiting Lion Raider as Kamen Rider Zero One Shining Assault Hopper. Unfortunately, he was too strong for Aruto to handle on his own, even being able to knock the Authorise Buster out of his hands. Fortunately, Isamu Fuwa stepped in to assist Aruto, and the two managed to overpower the Dynamaiting Lion Raider until the latter executed a Dynamaiting Bolide and tossed two of the Dynamite Sticks on his mane towards the two riders, before retreating. During his run, he dropped a ZAIA Spec and was taken by Aruto and Isamu. Masuji was chosen to investigate the ZAIA Spec's owner and told Aruto and Isamu to be Naoto's ZAIA Spec, giving them the idea that Naoto is the Raider.

During the last day of the trial, Isamu co-operated with Bingo for both investigations and saved Yuto Sakaki. Isamu investigated clearly without a mistake and found Masuji to be the Raider and the true culprit behind the marriage scam. Isamu accosted and dragged him to the judge by force. After being shown to the judge and the rest, Yuto admitted without regret that Yuto was just a target without any ill feel as Masuji wanted to raise his arresting record, sabotaged crime so he would be the one who finished it and got the price. But after Isamu had shown the Dynamaiting Lion Progrisekey, Masuji tackled Isamu and took the key, transforming into the Dynamaiting Lion Raider after exiting the building.

During the fight with Kamen Rider Vulcan Assault Wolf, the Raider spotted Kamen Riders Thouser and Zero-One, in his new MetalCluster Hopper form, and intended to attack Zero-One until the unconscious rider's Cluster Cells swarm attacked both the Raider and Vulcan, the latter avoided with damaged gauntlets. The Raider, however, took the full brunt of the swarm's attack, destroying most of the Raider's suit and the Raidriser, forcing the critically injured Masuji back into his human form and passed out from the attack. After the battle, Masuji was exposed as the true culprit of the scandal, which led to his arrest and dismissal as he recuperates. 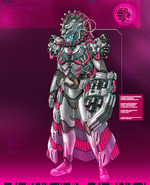 Retrieved from "https://kamenrider.fandom.com/wiki/Masuji_Narusawa?oldid=614978"
Community content is available under CC-BY-SA unless otherwise noted.