Masato Mishima (三島 正人, Mishima Masato) was the aide of ZECT HQ's leader, Riku Kagami. Masato was also one of TheBee Zecter users to transform into Kamen Rider TheBee (仮面ライダーザビー, Kamen Raidā ZaBī, Masked Rider TheBee)) temporarily after the defeat of Shun Kageyama. Later he was revealed as one of the true main antagonists of the series and used the form of Gryllus Worm (グリラスワーム, Gurirasu Wāmu) in episode 48 of Kamen Rider Kabuto.

In future Kamen Rider crossovers, he was presumed to be the one who used the powers of TheBee Zecter despite the fact that he only transformed once, thus becoming Kamen Rider TheBee in the crossovers.

At times he does communicate with So Yaguruma and Syuichi Tadokoro to brief the ZECT teams about the Worms. Eventually, he was upset with Yaguruma botching a mission and Tadokoro questioning him about ZECT's agenda. There's implication that he has no faith in Kageyama as TheBee, despite Kageyama being loyal to ZECT and was looked down upon by Kamishiro. He has no sense of taste, and finishes eating by taking a supplement. He forcefully became TheBee at one time despite the TheBee Zecter's attempt to reject him. He truly thinks Kageyama was an eyesore because he can only complain and has lost the TheBee Zecter. He also seems to have a connection to Rena Mamiya/Uca Worm and had always kept the Hyper Zecter with him. Renge manages to steal the case with the Hyper Zecter, but Uca Worm takes it back only to find that the case has been rigged with a bomb.

Mishima tries to destroy the Hyper Zecter with the bomb. After the explosion, he taunts Tendo for failing to obtain the Hyper Zecter. However, he doesn't realize the power of the Zecter as it manages to find its way to Tendo, much to his chagrin. He then tosses his glasses to the ground in anger. He gradually loses respect for Riku Kagami's servile manner toward the Natives. After realizing Negishi found out about the Red-Shoes system, he makes a pact with Negishi and overthrows Riku Kagami as leader of ZECT. Using the Natives' pendants, he gains the ability to turn into Gryllus Worm, the strongest Native. He was defeated by Hyper Kabuto's and Gatack's Rider Kick and then destroyed by the meteorite explosion that obliterated the studio set.

Kamen Rider TheBee appears with the other Kamen Riders commanded by Wataru Kurenai, but all of them are murdered by Decade in episode 1 of Kamen Rider Decade in the dream of Natsumi Hikari. The dream concludes with Decade as the only Rider in the Rider War. Rider War

In the special version of episode 31, Kamen Rider TheBee is seen as one of the many Kamen Riders who fought in the Rider War against Decade and were all destroyed. They were presumably restored after the destruction (and subsequent revival) of Decade at the end of the Rider War and the worlds were restored. The Destroyer of Worlds

Kamen Rider TheBee was part of a group of reinforcement riders led by Akira Date/Kamen Rider Birth to aid the primary riders in defeating the Rock Great Leader. All the Kamen Riders got on their bikes and performed the All Rider Break attack which destroyed the Great Leader. OOO, Den-O, All Riders: Let's Go Kamen Riders

The Gryllus Worm, resurrected again as one of the Great Commanders of the revived Dai-Shocker. Following the orders of Doktor G, Dai-Shocker's second in command, he engages GokaiPink in combat and they're evenly matched. The two evil organizations united and faced off against the combined forces of the Super Sentai and Kamen Rider Forces. Kamen Rider × Super Sentai: Super Hero Taisen

The Gryllus Worm was one of the monsters in the Space Shocker army which fought a combined force of Kamen Riders, Super Sentai teams

as they approached the Genmu Castle

Gryllus Worm appears in the epilogue of Kamen Rider Wizard with the other monsters,later they found the Rider Rings and they meet later in the lair of Amadum alongside other Kaijin Monsters. The Kamen Rider Rings

Kamen Rider TheBee appears as a toy, when Sento Kiryu and Sougo Tokiwa they find Ataru Hisanagahe brings them to his room which is filled with Kamen Rider memorabilia, with Sougo and Sento stunned to see toys of themselves. Ataru reveals that Kamen Riders are fictional.Kamen Rider Heisei Generations FOREVER

Kamen Rider TheBee Masked Form appears with G4, X, and Kaixa. According to Sieg, TheBee is considered by Sieg a least compatible match.Type44. - Quietly Listen! Underwear, Myself and Underwear

Kamen Rider TheBee and Gryllus Wormr appears as a playable character with the other Heisei and Showa kamen Riders in Kamen Rider Riderbout. 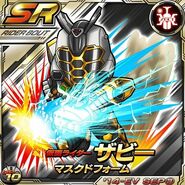 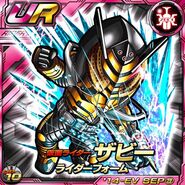 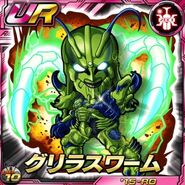 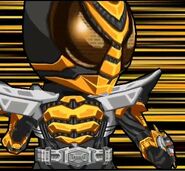 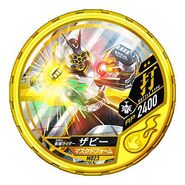 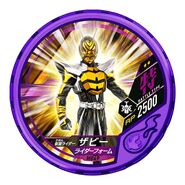 Kamen Rider TheBee Medal
Add a photo to this gallery

Mishima is a no-nonsense, stoic and calculating individual as a devout member of ZECT. He shows no reluctance or resistance in dealing with the more shady business for ZECT. While he treats his superior with high regards, he treats the rest of the ZECT members, especially Kageyama beneath him. During the final stages of the series, he no longer treats Riku as his superior anymore, having become tired of his overly obedient manner towards the Natives. As a result, he shows no qualms in taking over his position as the leader of ZECT, and even goes along with Negishi's plan to turn everyone into Natives.

He has a habit of dropping his glasses into the ground and smashing them with his feet when he is agitated.

In the final episode, he admits that he has a deep hatred towards people who are righteous, like Kagami and Tendo.

As the Gryllus Worm, Mishima is one of, if not the most powerful Native Worm ever. In this form, Mishima is able to casually swat away the likes of Dark Kabuto and Gatack without difficulty. In fact, he can even overpower Hyper Kabuto and Gatack at the same time (Kabuto's Maximum Hyper Typhoon fails to damage him). His stingers on the back are also so powerful, that they allow him to counter a Rider Kick from Dark Kabuto and knocks him out. However, the very same stingers are his vital weaknesses. When they are hit with enough force, such as with Gatack's caliburs, they render him weakened for a brief moment, and wide open to attacks. In fact, it is only after Gatack finds out this weakness that the two are able to win against the Gryllus Worm.

He only used the TheBee Zecter for a short period. In episode 48 of Kamen Rider Kabuto, he assumes the form of the strongest Native Worm, Gryllus Worm.

Masked Form (マスクドフォーム, Masukudo Fōmu) is TheBee's strong, heavily armored, but less offensive form resembling a beehive. This is the default form until the rider rotates TheBee Zecter around the wrist to initiate the Cast Off command.

This form is exclusive to Kabuto Episode 16

Rider Form (ライダーフォーム, Raidā Fōmu) is TheBee's sleeker, faster, and more offensive form which morely resembles the wasp motif. In this form, TheBee can initiate the Clock Up command to travel at near light speeds match the speed of Worms. By pressing a button on TheBee Zecter, the Rider Sting (ライダースティング, Raidā Sutingu) tachyon-powered punch is activated, allowing the user to pierce through a Worm with the stinger on the TheBee Zecter.

The form Mishima took on after using multiple necklaces to forcefully transform himself into the "strongest Native", able to contend with the likes of Dark Kabuto and Hyper Kabuto and overpower them. He had the ability to shoot electric tentacles from the protrusions on his shoulders, and was physically strong enough to swat away Gatack and Kabuto effortlessly. However, once Gatack destroyed his shoulder protrusions, he was severely weakened, and he was destroyed by Hyper Kabuto and Gatack's (Double) Rider Kick.

Retrieved from "https://kamenrider.fandom.com/wiki/Masato_Mishima?oldid=683605"
Community content is available under CC-BY-SA unless otherwise noted.