Masashi was a detective, using his job to effectively cover up his illegal activities, disposing of any witnesses to his acts. He had a partner, the older Tomoyuki Kaga who owned the Antiques and Collection shop, until the older man's demand - for a bigger cut in the profit - made Masashi kill him, plastering him into the wall of his own shop seconds before Shiro Kanzaki appeared and offered him a Card Deck, explaining the terms of accepting it. Masashi took it gladly and made his Contract with the Mirror Monster Volcancer, becoming Kamen Rider Scissors and playing a part in the disappearances as he feeds his victims to Volcancer. He and Ren Akiyama (Kamen Rider Knight) confronted each other once prior to the series, neither aware of each others' identity.

Reiko was investigating the Antiques and Collection shop after finding a link between it and some of the missing people, only to be attacked by Masashi hiding in the shadows. When the passerby she had spoken with heard the commotion and screamed for help, Masashi ran out through the back and came back through the front pretending to be a passing officer. Reiko was taken to the hospital where she would spend the next couple of days, attempting to unravel the mystery while sending Shinji to investigate the issue for her. But when Shinji ran across Scissors in the Mirror World while fighting Volcancer, Ren came to his aid after making the conclusion that Kaga was the Rider. But against Ren's wishes, Shinji attempted to make peace with Scissors, leaving his calling card in the shop.

Deciding to take advantage of the boy's gullibility, Masashi easily tricked Shinji into giving his name, Knight's human identity and Yui Kanzaki's address. With that, Masashi had Volcancer stage an "accident" for Ren, while he personally attempted to kill Shinji himself from Mirror World. When that failed, Masashi then kidnapped Yui to use her relation to Shiro for his benefit. Ren was able to corner him and rescue Yui, revealing that he knows the truth behind Kaga (who was plastered to the shop wall as Ren found the cracking cemented wall and glasses falling out of it, with the hand of Kaga sticking out). Masashi was forced to fall back when Shinji arrived, only to be contacted by Reiko, who realized that he was the killer after learning from other detectives that the attack on her wasn't reported to the police. The two detectives pursued Masashi from the hospital and cornered him, only for them to end up being dragged into Mirror World by Volcancer to be devoured as Shinji arrived on the scene.

After revealing his intent to kill off everyone who now knows the truth behind Kaga's murder, Shinji was about to fight Masashi when Ren took his place in battling Scissors with Shinji as Kamen Rider Ryuki watching. In the course of the battle, Ren managed to crack Scissors' Card Deck. After using their Final Vents on one-another, Scissors' Deck shattered, thus breaking his Contract with Volcancer as Scissors' armor started to fade. Volcancer immediately grabbed and pinned Scissors against its chest, devouring its master in an ironic death by betrayal.

In the 13 Riders special, Masashi was among Kamen Rider Verde's conspirators in trapping Shinji by pretending to be his ally. He was suddenly betrayed and killed by Kamen Rider Ouja, stating his dislike of police officers.

Kamen Rider Scissors was part of a group of reinforcement riders led by Akira Date/Kamen Rider Birth to aid the primary riders in defeating the Rock Great Leader. All the Kamen Riders got on their bikes and performed the All Rider Break attack which destroyed the Great Leader. OOO, Den-O, All Riders: Let's Go Kamen Riders It is unknown if this Scissors is a revived Masashi or an A.R. World one.

Kamen Rider Scissors appears in the video game with the others Kamen Riders of the Heisei Era,in Kamen Rider Climax Heroes OOO.

Kamen Rider Scissors appears in the video game with the others Kamen Riders of the Heisei Era,in Kamen Rider Climax Heroes Fourze.

Masashi can transform into Kamen Rider Scissors using his Advent Deck and V-Buckle upon forming a contract with Volcancer. His Visor, the Scissors Visor (シザースバイザー, Shizāsu Baizā), is a claw-equipped gauntlet on his left arm that also functions as his personal weapon. Scissors' jumping height and running speed are identical to Ryuki's, but his kicking power is lower in exchange for a slightly higher punching power.

Through the use of his Strike Vent Advent Card, Scissors can arm himself with the Scissors Pinch (シザースピンチ, Shizāsu Pinchi), an arm-mounted claw derived from Volcancer's left pincer. His Guard Vent equips him with the Shell Defense (シェルディフェンス, Sheru Difensu), a shield derived from the armor plating on Volcancer's back. 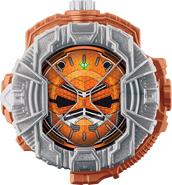 Scissors Ridewatch (inactive)
Add a photo to this gallery

Retrieved from "https://kamenrider.fandom.com/wiki/Masashi_Sudo?oldid=483995"
Community content is available under CC-BY-SA unless otherwise noted.