Masaru was originally an assistant to Doctor Mochizuki until the doctor conducted experiments on him. Horrified at being made into a grasshopper-like cyborg, Masaru went into hiding in the mountains, but fell asleep for four years until he awoke with an unconscious urge to protect "Hiroshi". Finding the boy, he fought with the monster Doras who was attacking him, transforming into Kamen Rider ZO in the process. Impaling Doras on a metal pole, he followed the boy, Hiroshi's grandfather Seikichi Mochizuki recognizing him.

He again transformed into ZO to protect Hiroshi from the Koumori Man and Kumo Woman, monsters sent after Hiroshi by Doras. He defeated the Kumo Woman, but the Koumori Man took Hiroshi to his father Doctor Mochizuki's lab. Following, he quickly defeated the Koumori Man before the Neonoid, Mochizuki's ultimate creation, awoke, having imprisoned the Doctor for not letting it go free. ZO is defeated and absorbed by Doras, but hearing the music of Hiroshi's pocket watch distracts Doras, letting ZO break free and destroy it and the Neonoid. He managed to rescue Hiroshi but couldn't save the Doctor. Bringing Hiroshi back to his grandfather, he rides away on his motorcycle. 「Kamen Rider ZO」

Though he hated Mochizuki for making him a cyborg, Masaru eventually forgave him before learning the man was telepathically communicating with him.[1]

Later, ZO teamed up with Kamen Rider J. The two riders fought a gang of five revived monsters led by Shadow Moon: Sai Mutant, Cyborg Soldier Lv. 2, Agito, Garai, and Zu. Berry witnessed Shadow Moon's plot and is attacked by the mutants. Masato and his sister Ayumi stumble onto an injured Berry by chance and are chased by the revived mutant army as a result.

However, they are saved by the sudden arrival of Kamen Rider ZO on his ZO Bringer motorcycle, who thwarts off the monsters into a nearby abandoned warehouse. ZO is suddenly assisted by Kamen Rider J, who arrives into the warehouse on his J Crosser bike. The five mutants are defeated by the combined forces of the new Double Riders. The two are then challenged by Shadow Moon, who enlarges himself into giant proportions. J grows into giant size as well and fights off Shadow Moon by himself. Shadow Moon is defeated and peace returns to the day. 「Kamen Rider World」

He arrives with the other Riders to fight Dai-Shocker's monster army, fighting Shocker Combatmen, the Butterfly Orphnoch, a Bakeneko, and the Slug Orphnoch before taking part in the All Rider Kick to destroy the Dai-Shocker Castle and Nobuhiko Tsukikage (Shadow Moon). He then became a Kamen Ride Card for Kamen Rider J as the giant Decade Complete Form to kick through to defeat Kingdark. The day saved, he left with the other Riders through a dimensional rift. 「Kamen Rider Decade: All Riders vs. Dai-Shocker」

The Double Riders joined with New Den-O and OOO to fight Shocker's forces, but were eventually defeated. When the order was given to kill everyone, V3 suddenly appeared, asserting that there were more than four riders. V3 was soon followed by all the other revived riders that came after him, including ZO, as even though Rider history was changed, the people's memories haven't changed.

After the riders were united, they faced off against Shocker's Great Leader. Later, when joined by a force of extra riders, ZO and all the other riders got on their motorcycles and performed the "All Rider Break", ramming into the Rock Great Leader and defeating it once and for all. 「OOO, Den-O, All Riders: Let's Go Kamen Riders」

ZO was among the Kamen Riders caught up in the 'Super Hero Taisen' incident. He was presumably sent to the dimensional rift, under the pretense of being defeated, by Captain Marvelous while he was apparently hunting the Riders. When his and Tsukasa's ruse was revealed, ZO and the other Riders appeared through the dimensional wall. ZO then fought alongside all the other Kamen Riders and Super Sentai

As one of the 15 Showa Riders, ZO fought in the battle against the 15 Heisei Riders in Zawame City. At some point during the fighting, he was defeated by a Heisei Rider, turning into a Lockseed.

ZO was later released with all the other sealed Riders by Kamen Riders Gaim and ZX. United, all 30 Kamen Riders teamed-up to take down the revived Badan Empire.

After Badan was defeated, ZO fought with the Showa Riders in a final showdown against the Heisei Riders. ZO took on Agito, striking each other with their Rider Kicks and falling to the ground after their power collided. The battle was ended when Rider 1 and Gaim reconciled on the differences of the two sides of Kamen Riders. 「Heisei Rider vs. Showa Rider: Kamen Rider Taisen feat. Super Sentai」

Due to the timeline alteration caused by Shocker, ZO became one of the brainwashed Riders in that timeline, donning the name of Shocker Rider ZO.

Following the Rider Grand Prix in which Drive emerged victorious over Kamen Rider 3, who was promptly integrated into the Great Leader of Shocker's Rider Robo form, ZO was among the Riders who appeared to attack Zeronos Zero Form and Denebick Buster only to be fought off by the turncoat BOARD Riders: Chalice, Leangle, Blade and Garren. Ultimately, the Double Riders 1 and 2 made their appearance having survived their apparent demise from within the Rider Robo, and broke Shocker's brainwashing on the fallen Riders, enabling all Riders to unite in a final battle against Shocker.

Unfortunately, ZO was among the Riders whose existence was erased by the Rider Robo. This fate, however, was rendered moot when the Rider Robo was finally destroyed by Shurikenjin Tridoron

Masaru is capable of transforming into Neonoid #1 (ネオ生命体第1号, Neo Seimei-tai Dai 1-gō), a mutant that partially incorporates the grasshopper gene and machine called ZO, who would be later called Kamen Rider ZO. Masaru first gained this ability after being forced to undergo surgery and genetic modification by Doctor Mochizuki, who was driven by madness. At first, he had no control over the transformation and it was triggered by emotional stress. A bolt of lightning somehow corrected this problem while putting Masaru in a coma. During his four year coma, the Red Core (レッドコアReddo Koa, Red Core) on his waist absorbed the biological energy of nature to enhance ZO's power to an unknown limit.

Having undergone organic remodeling, Masaru has a strong body and special abilities even before transformation. He has extraordinary durability, as seen when he withstood a direct hit from Doras's Moleculaser, and was able to transform immediately afterward. ZO also possesses a healing factor to some degree, as he is able to recover from injuries in a short period of time. Masaru has several telepathic abilities. He can telepathically communicate with grasshoppers, which enables him to see the locations where they have been or listen to the conversations of those around the insects. Doctor Mochizuki was communicating with him psychically over long distances as well. He also repaired Masaru's broken pocket watch through unknown means.

Upon transformation, Masaru's body resembles a locust, enveloped in a dark green armored shell made of enhanced biological tissue covering the entire body with golden biological lines. ZO's strength is able to crush special alloys up to 20 cm thick and he can scrap up to 50 cars in a single blow.

Another of ZO's features within his insectoid head is the Break Toother (ブレイクトゥーサー, Bureiku Toūsā), a breathing apparatus stored around the mouth plate that releases vapors from holes in the golden lines on the back of his head, bearing a resemblance to fangs when extended.

KamenRide: ZO (カメンライドZO, Kamenraido Zetto Ō) is the Rider Card which contains the power of Kamen Rider ZO. In All Riders vs. Dai-Shocker, Decade Complete Form Jumbo Formation performed the Final Dimension Kick, a variation of the Dimension Kick, transforming the Shōwa Riders, including ZO, and Heisei Riders into Kamen Ride cards for Decade to travel through as opposed to Final Attack Ride cards before hitting the target.

Kamen Rider ZO Lockseed (仮面ライダーZOロックシード, Kamen Raidā Zetto Ō Rokkushīdo): A Lockseed bearing the likeness of Kamen Rider ZO, created when ZO was defeated in the battle between the Showa Riders and Heisei Riders. 「Heisei Rider vs. Showa Rider: Kamen Rider Taisen feat. Super Sentai」 The core image depicts ZO's waist while the lid backside image depicts Berry. When inserted into a Sengoku Driver or when channeled through the Showa Rider Lockseed, it would allow an Armored Rider to assume ZO Arms (ZOアームズ, Zetto Ō Āmuzu). It is styled for Zangetsu and Mars in the toyline. 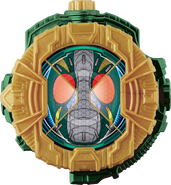 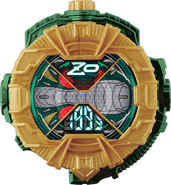 In a stage show where the Zyurangers are seen fighting their usual foes, Neonoid shows up and ends up defeating them. Exceedraft

arrive to assist the Zyurangers. 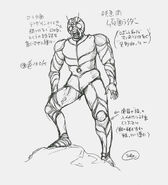 A design decided by Shotaro Ishinomori. Details such as biological treatment and joint seams are specified.

ZO’s styling study design. This becomes an ambitious design that eliminates the installation of protectors and transformation belts.

One of ZO's conceptual designs would serve as the early basis for his successor Kamen Rider J.