After learning that Shiro is Yui's brother, Reiko returns to the Office and then volunteers to meet a man at a marriage interview, figuring the experience may one day help her journalism. At the meeting however, the man accuses her of pitying him and she leaves. As Reiko is walking home, she senses someone following her. The following night, she is stalked again. However, Shinji attacks the stalker who is revealed to be Goro with a bunch of flowers, but knocks himself out in the process.

Shinji wakes up at Kitaoka's where he finds out that Goro was simply giving flowers to Reiko on his request and is in fact not the stalker. They go to find Reiko but she is not at her apartment, also running into Ren. They find her bag and begin to suspect the man who had the marriage interview with her.

Using Shimada as a decoy, Ren & Shinji set up a trap to see if he is the stalker or not. Shinji thinks he hears something but assumes it was his imagination. They follow Shimada after the interview, but after quarreling for a few seconds with Kitaoka, they realize she has disappeared. They hear the presence of a Mirror Monster and enter to fight. Ambushed by a Shieldboarder, Zolda sarcastically refuses to help Knight & Ryuki but eventually does. The Monster runs away after being hit by Zolda's Shoot Vent.

Ren & Shinji decide to use Yui as a 2nd decoy, however unlike the others, Yui manages to initially win the heart of the man. While the man goes to the store for more coffee, Yui attempts to find Reiko & Shimada in his apartment. Meanwhile, Kitaoka contacts Ren & Shinji and tells them that the man isn't the culprit as he has an alibi. However, Yui answers the door at the apartment where she talks to and begins to suspect the nextdoor neighbor wearing a necklace similar to Reiko's.

Shinji, Ren, and Kitaoka, without planning with each other, all end up dressing up as salesmen and meeting with the woman at the same time. After embarrassing attempts at selling tea cups (from Atori, Yui's cafe), pots (also from Atori), and Defense Attorney services (Kitaoka is accused by Shinji of trying to get a client out of this ordeal if she's the one responsible), they find that the woman has disappeared. They chase after her, but she is eaten by the Shieldboarder from earlier. The three Riders enter the Mirror World to fight the Monster, when Ryuki sees a Sonorabuma, recognizing its hiss as the sound he'd heard when watching Shimada. He follows it and finds a sleeping Shimada & Reiko. Ryuki kicks the Sonorabuma through a mirror and into Zolda's Shoot Vent and Knight's Final Vent. The Shieldboarder seems to have disappeared, though.

To celebrate the end of the ordeal, Shinji, Ren, Kitaoka, Reiko, Yui, and Shimada have dinner at a tiki-themed restaurant. 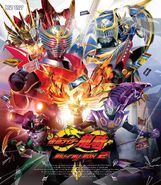 Retrieved from "https://kamenrider.fandom.com/wiki/Marriage_Interview_Battle?oldid=598040"
Community content is available under CC-BY-SA unless otherwise noted.