The Machine DenBird (マシンデンバード, Mashin Denbādo) is Kamen Rider Den-O's bike that is able to launch from the DenLiner. Although Ryotaro Nogami never uses it as a means of transportation, the Taros would sometimes use it while possessing his body. While docked in the DenLiner, it serves as the control mechanism for the train. When a Rider Pass, along with a Rider Ticket, is inserted into the DenBird while it is docked in the DenLiner, the date on the ticket becomes DenLiner's destination. During the fight with the Oct Imagin, the bike is sabotaged by the enemy and turns against Den-O. Though it burst into flames, the DenBird was later repaired or replaced fast enough to be used against the rampaging time-tracks under the control of the Oct Imagin's remains.

The DenLiner will not run without the DenBird, however, Owner has a bicycle that he can hook up to the DenLiner to manually run it. Of course this requires a lot of physical strain. 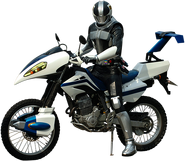 Momotaros as Den-O got on his DenBird, among many other Kamen Riders and their Rider Machines, to perform the All Rider Break attack which ended the final battle with Rock Great Leader. OOO, Den-O, All Riders: Let's Go Kamen Riders

Retrieved from "https://kamenrider.fandom.com/wiki/Machine_DenBird?oldid=682400"
Community content is available under CC-BY-SA unless otherwise noted.