The Destroyer of Worlds (Special Version only)

"Good to see you guys. Taking care of all of you...is also part of my job."
―Leo as he encounters the renegade Orphnochs[src]

After Kyouji Murakami (Rose Orphnoch) was decapitated by Takumi Inui's Kamen Rider Faiz Blaster mode, his head is rolling about when the Lion Orphnoch picks it up. Murakami asks him to bring him back to the Smart Brain headquarters, and to recover Delta’s belt at the same time: They’ll be using it to make the “Emperor’s Belts”. The Lion Orphnoch (seemingly a foreigner) speaks in broken Japanese, stating that he will do it on the condition that he utilizes one of the belts. Accepting this offer, Murakami promises Leo the Belt of the Sky, the Psyga Driver.

Paradise Lost is considered as a continuation of an alternate ending, in which Smart Brain and the Orphnochs have won the war. In the near future, Smart Brain has accomplished its goal of world domination - with 90% of Earth's population being Orphnochs while the human race is diminishing to near-extinction. Takumi Inui - a.k.a. Kamen Rider Faiz - was regarded as mankind's savior until he was presumed killed during an attack by Smart Brain's Riotroopers. Murakami then discloses the existence of the Emperor Belts by introducing the Orphnoch Leo, who changes into the powerful Kamen Rider Psyga.

He was given the Psyga Gear by the Smart Brain corporation, allowing him to transform into Psyga. As Psyga, he is under the personal supervision of the Rose Orphnoch, Kyouji Murakami. When Yuji, Naoya and Yuka approach the Human Liberation Army and notify them of Psyga's power, Paradise is suddenly invaded by Riotroopers. During the attack, Masato Kusaka/Kamen Rider Kaixa battles Psyga, but is quickly defeated and killed. Psyga attempts to take the Kaixa Belt, but he is warded off by the three Orphnochs allied with the humans. Later, Kamen Rider Psyga attacked and abducted Mari, then taking her into the city to be executed. Takumi barged into Tokyo's indoor sports stadium to rescue Mari from the Elasmotherium Orphnoch. As Faiz, Takumi had a difficult time defeating the Elasmotherium Orphnoch. While the Auto Vajin helped, the robot was ultimately destroyed in the battle. As Faiz was attempting to kill the Elasmotherium Orphnoch with a Crimson Smash, Psyga appeared and forced him out of the stadium with his Flying Attacker.

Once outside, Faiz switched to Axel Form for high-speed combat. He was able to chase down Psyga and damage his Flying Attacker before reverting to Faiz form. Psyga switched to melee combat with his Psyga Tonfa Edges and the fight dragged back into the stadium. Mari was watching the fight as well and Psyga charged at Faiz, his Tonfa glowing as his finisher, Psyga Slash was initialized. Mari threw Faiz his Faiz Edge for a counter-attack, with the rider setting the Mission Memory in time for the Sol Glass to extend to deflect his opponent's right blow, and re-directed the weapon right onto the Psyga Driver. Not letting up, Faiz quickly hit the Enter Button on his Faiz Phone when the blow stunned Psyga, completing the Sparkle Cut to vaporize the opposing Rider and his Gear.

Kamen Rider Psyga appears with other kamen Riders commanded by Wataru Kurenai, but all are murdered by Decade in the episode 1 of Kamen Rider Decade in the dream of Natsumi Hikari and then conclude the dream with Decade as only Rider in the Rider War. [Rider War]

Kamen Rider Psyga with the other Riders appears when Natsumi remember her dream of the Rider War, the dream ends shock of fists between Decade and Kuuga. [The World of Kuuga]

The Grandma Way of Taste

Kamen Rider Psyga is summoned among Kamen Rider Ixa by Diend to fight Kabuto, the main objective to Diend is acquire Kabuto Clock Up system, Psyga armed with his Flying Attacker to stop Kabuto later use Tonfa Edge again Kabuto but he amoung Ixa are easily defeated by Kabuto. [The Grandma Way of Taste]

In the special version of episode 31, Kamen Rider Psyga is seen as one of the many Kamen Riders who fought in the Rider War against Decade and were all destroyed. They were presumably restored after the destruction (and subsequent revival) of Decade at the end of the Rider War and the worlds were restored.[The Destroyer of Worlds]

Kamen Rider Psyga appears as a toy, when Sento Kiryu and Sougo Tokiwa they find Ataru Hisanagahe brings them to his room which is filled with Kamen Rider memorabilia, with Sougo and Sento stunned to see toys of themselves. Ataru reveals that Kamen Riders are fictional.[Kamen Rider Heisei Generations FOREVER]

Kamen Rider Psyga appears with Amazon, Kuuga Ultimate Form, and Blade Jack Form. According to Momotaros,Psyga is considered the devil rider. [Type10. - Peppers! Do You Have a True Rider Soul!?]

Kamen Rider Psyga appears with Double, Agito Flame Form, and Exceed Gills. According to Kivat-Bat the 3rd, Psyga is considered a good marriage material. [Type11. - Anyway, We Do Like Hell!]

Kamen Rider Psyga appears as a playable character with the other Heisei and Showa Kamen Riders in Kamen Rider Riderbout.

Kamen Rider Psyga appears as one of the Riders summoned by Kamen Rider Diend in Kamen Rider: Battride War Genesis. 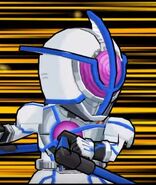 Kamen Rider Psyga appears as a playable character and Boss among the other villains in Movies or TV series. He appears in his respective event and performs his Psyga Slash against his opponents in Kamen Rider Transcend Heroes.

Orphnoch with the nature of the lion. Though not much to be known but the Lion Orphnoch is armed with a combat staff while bearing the motif of a Roman gladiator.

Kamen Rider Psyga exists in a world where the Orphnochs have taken over the planet and the humans are slowly being exterminated. The Psyga Gear was recorded as the fifth Rider Gear created by Smart Brain, after the Faiz, Kaixa, and Delta Gears were stolen by the humans and the Riot Trooper gear had undergone mass-production. Created alongside the Orga Gear, the Psyga Gear is regarded as a "perfect" gear, and therefore it can only be worn by Orphnochs. Psyga appeared to be as fast and strong as the existing gears, matching Kamen Rider Faiz Axel Form for speed and Kaixa for strength. Because the weapons appear once the armor is formed and were created based on trial data from the previous gears, it possesses much greater functionality and ability than the previous riders.

Armor Information The Psyga Armor has several key features in its design. Unlike the Gear, the armor does not exist until the wearer transforms.

During his brief appearance in Kamen Rider Decade, Psyga was voiced by an unknown voice actor. 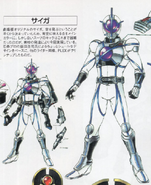 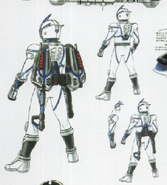