The Ladder Expander (ラダーエキスパンダー, Radā Ekisupandā) is a Tire Specific Item modeled after an extension ladder that is wielded by Kamen Rider Drive when he uses the Shift Fire Braver Car to activate the Fire Braver Tire, which can also be combined with the Justice Hunter and Mad Doctor Tires to create the People Saver Tire via Type Tridoron's Tire Blending ability.

It can also be accessed by Kamen Rider Mach if he inserts the Shift Car into his Mach Driver Honoh to activate the Kourin Signal Nobiru. Ultimately, however, Mach was never shown to use this ability.

The Ladder Expander can be used to grab and lift anything, whether it be other people or random objects, if Drive lifts the Shift Fire Braver Car placed within the Shift Brace three times. The Ladder Expander also participates in Type Technic Braver's Full Throttle finisher, the Rescue Down (レスキューダウン, Resukyū Daun), where it grabs the target and pulls it towards Drive for him to slam a powerful kick into the target.

In Fire Braver's variant of the Door-Ju's Full Throttle finisher PerfecShot (パーフェクショット, Pāfeku Shotto), Drive fires a beam of energy resembling the Ladder Expander, which grabs the enemy and pins them to the nearest wall before he pulls the trigger to detonate the energy construct, taking out the target along with it.

When the Fire Braver Tire is summoned by Tridoron, it can be used to intercept an opponent by catching them with the Ladder Expander. 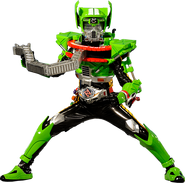 Rescue Down (Step 2: Side kick)