The Kurumi Bombers (クルミボンバー, Kurumi Bonbā, lit. Walnut Bombers) are the Armored Rider Arms Weapon granted either by accessing Kurumi Arms or via the summoning ability of Kiwami Arms. They consist of a pair of giant brass knuckles with some walnut-like pieces on the back of the hands.

As expected from the "Bomber" in their name, the Kurumi Bombers are able to unleash explosive punches, though its mostly for when a finishing attack is performed.

The Kurumi Bombers of composed of the following parts: 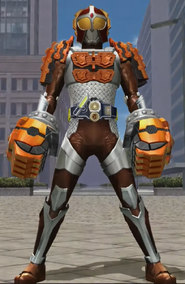 Kurumi Sparking
Add a photo to this gallery

Retrieved from "https://kamenrider.fandom.com/wiki/Kurumi_Bombers?oldid=533083"
Community content is available under CC-BY-SA unless otherwise noted.