26 years old[note 1], Kouji Segawa is a rising nature photographer[2] who mainly deals with wildlife and natural scenery, interested in environmental issues like the pollution of mountain lakes and forests in Japan. During the investigation, he was killed while attempting to protect his young friend, Kana and was thrown over the cliff by the Fog Mother's child Agito as Kana is taken by the insectoid Zu.

However, Kouji was resurrected by the Earth Spirits as a J-Powered Warrior, Kamen Rider J, acting on their will to fight the Fog with their emissary Berry as his guide. With Fog Mother sensing Kouji's presence, Agito attempts to finish the job in his true form, only to be killed by J. Hurrying to Kana, Kouji enters their domain and faces Zu as she assumes her true form. Facing her, J manages to mortally wound Zu as she grabs him, taking to before they crash into the fortress which is Fog Mother.

After she dies, Kouji learns of Fog's intention of feeding humanity to Fog Mother's brood as Garai completes the ritual and sends Kana to the hatching chamber while manhandling Kouji. Berry intervenes to free Kana from Fog's spell before being struck down by Garai as Kana is sent down to her death while Fog Mother begins attacking a nearby city to prepare for her children's awakening. Assuming his Rider form, J fights Garai in his true form, Cobra Man, in a heated battle. After killing Garai, J is being digested by Fog Mother as he attempts to save Kana. However, absorbing the life energy around him, J kills off Fog's newly born spawn as he escapes the bowels of Fog Mother and assumes Jumbo Formation. After ripping Kana out of Fog Mother, J battles the monster before killing her as she attempted to take him down with her. Escaping Fog Mother's destruction, Kouji takes Kana to a serene environment with Berry watching from a distance.

Later, J teamed up with Kamen Rider ZO. The two riders fought a gang of five revived monsters led by Shadow Moon: Sai Mutant, Cyborg Soldier Lv. 2, Agito, Garai, and Zu. Berry witnessed Shadow Moon's plot and is attacked by the mutants. Masato and his sister Ayumi stumble onto an injured Berry by chance and are chased by the revived mutant army as a result.

However, they are saved by the sudden arrival of Kamen Rider ZO on his ZO Bringer motorcycle, who thwarts off the monsters into a nearby abandoned warehouse. ZO is suddenly assisted by Kamen Rider J, who arrives into the warehouse on his J Crosser bike. The five mutants are defeated by the combined forces of the new Double Riders. The two are then challenged by Shadow Moon, who enlarges himself into giant proportions. J grows into giant size as well and fights off Shadow Moon by himself. Shadow Moon is defeated and peace returns to the day. 「Kamen Rider World」

Using his Kamen Ride Card, J was summoned by DiEnd in Jumbo Formation at the end of the battle between the Kamen Riders and Dai-Shocker to fight Kingdark. J was referred to DiEnd as "a treasure he'd been saving". Quickly knocked back, Diend used the Final FormRide: Decade card to turn Decade into a giant Decadriver that attached onto J, turning him into a giant Decade Complete Form. The battle ended using the Final KamenAttackFormRide card, kicking through giant cards of all the primary Riders and performing the Final Dimension Kick, defeating Kingdark. 「Kamen Rider Decade: All Riders vs. Dai-Shocker」

He fought Tsukasa (Kamen Rider Decade Violent Emotion) in Jumbo form, but was defeated when Decade used The Side Basshar & G4's Gigant Kamen Ride Cards bombarding him with a barrage of missiles and sealed him in a Kamen Ride Card. J was depicted as slow moving in Jumbo Formation and unable to land a hit against the card-wielding Kamen Rider. 「Kamen Rider × Kamen Rider W & Decade: Movie War 2010」

The Double Riders joined with New Den-O and OOO to fight Shocker's forces, but were eventually defeated. When the order was given to kill everyone, V3 suddenly appeared, asserting that there were more than four riders. V3 was soon followed by all the other revived riders that came after him, including J, as even though Rider history was changed, the people's memories haven't changed.

After the riders were united, they faced off against Shocker's Great Leader. Later, when joined by a force of extra riders, J and all the other riders got on their motorcycles and performed the "All Rider Break", ramming into the Rock Great Leader and defeating it once and for all. 「OOO, Den-O, All Riders: Let's Go Kamen Riders」

J was among the Kamen Riders caught up in the 'Super Hero Taisen' incident. He was presumably sent to the dimensional rift, under the pretense of being defeated, by Captain Marvelous while he was apparently hunting the Riders. When his and Tsukasa's ruse was revealed, J and the other Riders appeared through the dimensional wall. J then fought alongside all the other Kamen Riders and Super Sentai

J, in Jumbo Formation was seen fighting Fourze in Rocketstates after he defeated Skyrider, and defeats the space Rider with a Jumbo Rider Punch when the latter tried to hit him with a Rider Double Rocket Drill Kick. After Fourze is defeated, he would later engage Gaim in Orange Arms, who then assumed Suika Arms Gyro Mode as he jumped off his shoulder after running up the enlarged Rider to properly fight J, with the smaller Rider proved to be more than a perfect counter to J. J was then defeated by Yoroi Mode skewering his Suika Sojinto hard into his chest, turning him into a Lockseed. 「Heisei Rider vs. Showa Rider: Kamen Rider Taisen feat. Super Sentai」

Due to the timeline alteration caused by Shocker, J became one of the brainwashed Riders in that timeline, donning the name of Shocker Rider J. In Jumbo Formation, J menaced the rebel Kamen Riders, Shinnosuke Tomari, Go Shijima and Kyoichiro Kuroi as they made camp overnight. As Shinnosuke made his stand, J faced down the Tridoron Type Wild only to lose his prey as Yuto Sakurai's ZeroLiner intercepted and spirited Tridoron away.

In a stage show where the Kakurangers

are seen fighting their usual foes, The Bandora Gang

, and Fog show up and they end up defeating them. Kamen Rider J, Ryuu

then arrive to assist the Kakurangers.

He is also playable in All Kamen Rider: Rider Revolution, as is his Jumbo Formation form, which makes this the first console game to have his form be playable.

Kamen Rider J is a playable character in Ganbaride with other Riders.

J is among the vast majority of Kamen Riders that are available in this arcade game.

Although J did not show up in any Kamen Rider SD media such as manga, OVA, or video games, his SD counterpart was released as a soft vinyl figure toy in one of the SD toylines along with Show

Kouji changes into a grasshopper-like warrior form known as Kamen Rider J by focusing his J Power through using the J Sign (Jサイン, J Sain) hand movement. This hand gesture also allows him to draw J Power for finishers and in certain cases make his fingers and thumbs glow with red energy in the shape of a J.

J possesses some kind of a healing factor, as he was able to heal heavy damage such as gashes on his body from Agito's jaws and his arm being impaled. However, these injuries take a moderate amount of time to heal and J can become temporarily drained of energy during particularly long battles.

Kamen Rider J has the ability to execute a variety of attacks to defeat his opponents:

Jumbo Formation (ジャンフォーメーション, Janbo Fōmēshon) is an alternate form that Kamen Rider J can assume when the Earth is in grave peril. By harnessing the lifeforce energy from the surrounding life forms and spirits, Kamen Rider J can grow to a giant size at 40 meters tall to fight against larger opponents. This form's power allowed him to knock Mother Fog away and withstand its attacks without being seriously injured.

In this form, Kamen Rider J has the ability to execute the Jumbo Rider Kick (ジャン ライダーキック, Janbo Raidā Kikku), a flying Rider Kick with immense destructive force where J channels his J Power after leaping high into the air and briefly flashes in a pink aura. J then drops back down rapidly with his giant foot blazing with burning hot energy to attack the target with the force of a meteor strike.

J is also capable of performing a Jumbo Rider Punch (ジャン ライダーパンチ , Janbo Raidā Panchi), in which J delivers a punch enveloped in a blazing red fire-like energy as it makes impact.

When Kamen Rider Diend uses a Final Form Ride card that turns Decade into the Jumbo Decadriver (ジャンボディケイドライバー, Janbo Dikeidoraibā), the larger version of the Decadriver is used by Kamen Rider J to transform into a fusion form called Complete Form Jumbo Formation (コンプリートフォーム ジャンボフォーメーション, Konpurīto Fōmu Janbo Fōmēshon). This Complete Form is identical in appearance to the regular version, except he is J's Jumbo size and he wears the Decadriver instead of the K-Touch on his belt buckle.

This form is exclusive to Kamen Rider Decade: All Riders vs. Dai-Shocker

KamenRide: J (カメンライドJ, Kamenraido Jei) is the Rider Card which contains the power of Kamen Rider J. Used by Diend to summon Kamen Rider J in Jumbo Formation. Used in the World of Decade to fight Kingdark.

In All Riders vs. Dai-Shocker, Decade Complete Form Jumbo Formation performed the Final Dimension Kick, a variation of the Dimension Kick, transforming the Shōwa Riders, including J, and Heisei Riders into Kamen Ride cards for Decade to travel through as opposed to Final Attack Ride cards before hitting the target.

Kamen Rider J Lockseed (仮面ライダーJロックシード, Kamen Raidā Jei Rokkushīdo): A Lockseed bearing the likeness of Kamen Rider J, created when J was defeated in the battle between the Showa Riders and Heisei Riders. 「Heisei Rider vs. Showa Rider: Kamen Rider Taisen feat. Super Sentai」 The core image depicts J's waist while the lid backside image depicts Berry. When inserted into a Sengoku Driver or when channeled through the Showa Rider Lockseed, it would allow an Armored Rider to assume J Arms (Jアームズ, Jei Āmuzu). It is styled for Gaim, Kurokage, Bujin Gaim, and Kamuro in the toyline.

J Ridewatch (Jライドウォッチ, Jei Raidowotchi): Based on Kamen Rider J, this Ridewatch would provide access to the JArmor. It is dated 1994.

The ability provided by this Ridewatch is to grow into gigantified size. 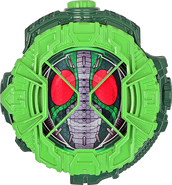 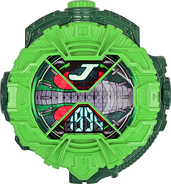 Before this definition in the Decade net movies, J was originally referred to as the "14th remodeled soldier" (１４人目の改造ソルジャー, Juuyon-ninme no kaizō sorujā) in trailers for the film, as Kamen Rider Black RX was originally seen as a form change for Black rather than a separate Rider.