The Kodama Suika Arms appeared, alongside the Gaim Watch, on the person of Kouta Kazuraba in November 2018, having been provided with two Blank Watches by a future Sougo Tokiwa. 「Zi-O On Parade 2018」 They were given to Sougo Tokiwa after Kouta saw he used Ridewatches similar to the ones he was carrying. When the Time Jacker Swartz threw the Gaim Ridewatch through a Helheim Crack, the Kodama Suika Arms activated itself to jump in after it, bringing it to the trapped Geiz Myoukouin. It opened a communication to its future self, which was with Sougo and Tsukuyomi, so they could coordinate with him to bring the Gaim Watch back to them. 「My × My Stage 2013」

The Kodama Suika Arms consists of the following parts:

When activated (it can also apparently activate itself), the Ridewatch unfolds (but does not grow) into Yoroi Mode as a tiny autonomous figure capable of infiltration or retrieval of small objects. Despite its small size, it can jump higher than a person's height. It has not demonstrated any notable physical strength in show, although it is claimed that it can lift objects 400 times its weight[1]. It can use a small double-sided tool resembling the Suika Sojinto to create a floating display screen capable of communicating with, among other things, a time-displaced copy of itself. Its fingers can shoot sprays of small projectiles seemingly resembling watermelon seeds. 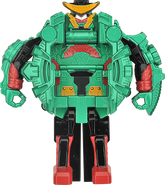 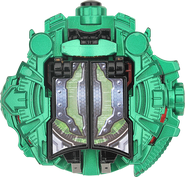