The Kiwi Gekirin (キウイ撃輪, Kiui Gekirin, lit. "Kiwi Attack Wheels") is the Armored Rider Arms Weapon granted either by accessing Kiwi Arms, Yomotsuheguri Arms, or via the summoning ability of Kiwami Arms. They take on the form of dual gigantic wind and fire wheels. They can also be thrown at an enemy like boomerangs, which also allows them to come back to the user.

The Kiwi Gekirin is composed of the following parts: 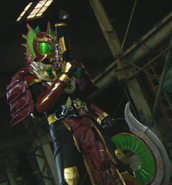 Retrieved from "https://kamenrider.fandom.com/wiki/Kiwi_Gekirin?oldid=555506"
Community content is available under CC-BY-SA unless otherwise noted.