The Scientist of Hope

Kamen Rider Build: Be The One

Kengo Ino (伊能 賢剛, Inō Kengo) is the main antagonist of Kamen Rider Build: Be The One. He was a former INSET astronaut who was possessed during the Kiwami Project by a member of the Blood Tribe, and secretly helped Evolto ignite the Japanese Civil War. As the governor of Touto, he manipulated the public to turn against Sento Kiryu, stealing his Hazard Trigger during an encounter and Ryuga Banjo's Great Cross-Z Dragon to become Kamen Rider Blood (仮面ライダーブラッド, Kamen Raida Buraddo).

Kengo Ino was at the press conference, saying that it is time for peace to come. He says that Kamen Riders must become extinct and the crowd chants extinction. He uses his ability to manipulate the civilians who fell silent and begin walking off different directions, entirely noiseless.

Kengo, alongside the other governors, had a meeting with Evolto and were revealed to be the Blood Tribe, survivors of the same race as Evolto who aim to destroy the planet and consume it. It is also revealed that they had been acting in the shadows ever since the Sky Wall appeared and manipulated each territory during the war until Evolto changed his mind and their plans were disrupted. Evolto tells them he won’t interfere but reminds them he has the upper hand with the power of the Pandora Box.

Sento then meets the mind controlled Ryuga and Kengo. After fighting, Ryuga beats Sento and takes the Hazard Trigger. Kengo then absorbs Ryuga along with the Scissors and Zebra Lost Smash, then uses the Hazard Trigger, Cobra Lost Fullbottle, and Great Cross-Z Dragon with Ryuga's Build Driver to become Kamen Rider Blood. He easily defeats Sento, but before he can deal the final blow, Evolto appears and takes Sento away.

Ryuga, Kengo, Mitsuomi, and Ryoka are outside, surrounded by civilians under their control. Sento arrives on his bike with the Pandora Box. Kengo becomes Kamen Rider Blood and Sento transforms into Build Genius Form. Kengo reveals that his encounter with Ryuga was orchestrated and they proceed to fight. Sento manages to pull Ryuga out of Blood's grasp. However, Blood takes the Pandora Box down into the ground, heading for the center of the Earth so that he can destroy the planet. Misora uses her powers to free Ryuga from Kengo’s control.

Sento and Ryuga, in the Build Cross-ZBuild Form, head down to fight Blood, and while they initially struggle to control their new form, they force Blood back to the surface and defeats him with the Love & Peace Finish. 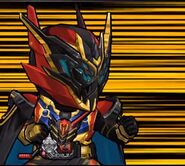 Kamen Rider Blood's main form is accessed by attaching the Hazard Trigger to the Build Driver and inserting the Great Cross-Z Dragon, loaded with the Cobra Lost Fullbottle.[2] During Blood's transformation, the Scissors Lost Smash, Zebra Lost Smash and Ryuga Banjo fuse with Blood due to their Blood Tribe DNA, though Blood can still function with them separated. Though others are fused with Blood, Ino is always solely the one in control.

Kamen Rider Blood is stronger than Build Genius Form and easily overpowered it. Only by assuming Cross-ZBuild and combining his own power with Cross-Z's could Build defeat him. Just like Blood Stalk, Blood can summon energy cobras to assist him in battle.

The following people were absorbed during Kengo Ino's transformation into Kamen Rider Blood. Although the three are fused with Blood, they are not fully conscious and Ino is solely the one in control.