Kaoru Kino (木野 薫, Kino Kaoru) was a disgraced surgeon who received the power of Agito on the Akatsuki and transformed into Kamen Rider Another Agito (仮面ライダーアナザーアギト, Kamen Raidā Anazā Agito).

He was a surgical genius, but an accident on a snowy mountain range would ruin his career and claimed the life of his younger brother, Masato. The incident left his right arm with severe frostbite, which ultimately had to be amputated. Ironically, surgeons would replace Kino's arm with that of his deceased brother. The traumatic event would have long-standing ramifications on his psychological and emotional health that would last for years.

Kino would eventually find himself involved in the incident aboard the “Akatsuki” and were among those individuals awakened by the OverLord of Light. Over time, his powers would mature, enabling him to transform into "Another Agito". Unfortunately, this power would further escalate Kino's manic mental state into grandiose delusions, becoming convinced that he alone could defeat the Lord threat. His delusions ultimately motivated him to try and eliminate Shoichi Tsugami, the primary Kamen Rider Agito. Though the actions of his brother's arm would occasionally interfere, it wasn't until his defeat at the hands of Kamen Rider Exceed Gills that Kino became humbled. From that point on, he would aid the other Riders, even after the Overlord stole his power.

He later performed a small surgery on Shouichi in attempt to remove the quill of Ericius Liquor from his body, during this Kino admitted that he had become corrupted not because of the Agito power, but rather his own weakness as a human being. After that Kino was able to recover his power thanks to Shouichi and help the group defeat the Ericius Liquor. After the fight, Kino goes with both Majima and Ryo for a cup of coffee, and encourages Majima that he can become a Doctor before finally dying from the injuries sustained by Falco earlier. However he died with a smiling face, after dreaming of being able to save his brother during the snow-mountain accident.

Another Agito and Exceed Gills appeared to Hikawa's aid when he was attacked by an Agito and a dog-type Unknown but they were easily getting defeated. Luckily Agito/Shoichi Tsugami finally shown up. The real identity of this Agito was Shouichi Maguichi, who was crazed after being blamed for cheating on the programs for using a hidden camera during his childhood. Wanting to cure his sick mind he worshipped the Dog Orphnoch/Dog Lord and was told to feed on the despair of the public. After Agito and the others killed the Dog Lord/Orphnoch, Maguchi/Agito transformed into Mirage Agito out of rage. In a fight with Kamen Riders Agito and Gills, despite gaining the upper hand he was defeated by the strategized use of the Shining Caliber and a Shining Rider Kick. Maguichi was then arrested and was given an unspecified treatment. Kamen Rider Agito: Heaven's Door

Kino was one of the dead Riders who existed in the game world created by Kuroto Dan as part of the latter's plan to revive himself using the despair of dead Kamen Riders. Initially suspecting Emu Hojo/Kamen Rider Ex-Aid to be the one behind this scheme.
Maze 1: Emu, is dead?

After discovering that unlike them, Emu is alive, the other Riders become divided between those who view him as a threat and those who support him. Kaoru transforms in Kamen Rider among Yoko Kaito Kazuma and Kiriya, later he stars the fight against Ex-Aid but is interfered by Kamen Rider Lazer , he needs answers but Lazer blocked his way and just Kamen Rider Baron appears in the help of Kaoru for surprise Kamen Rider Blade ends the Riders conflict, give the result the Riders divide in two different groups ,he among Yoko and Kaito made a conversation about the dreams the had before they death change to seem to decide to help Emu against Shocker ,later when all the Riders are allies ,in the place where encounters Emu tells everyone that they are caught in a game,Totema as Poppy

intefered and revels his real form and stars the fight Another Agito and the other Riders easily defeated his minions and easly defeated Tometa among Riders Kick by part all the Riders ,but in reality never defeat the Tometa and this start defeating all riders effortlessly and send to fly Another Agito ,Marika ,Baron and Lazer,it is seen that is easily surrounded by Shocker Combatants whit outh scape.Maze 2: Escape

Emu decided to return to the no-continue game world one more time despite the risk that his memory will be reset again. Kiriya, Kaito, Yoko, and Kino came back to the baseline and met the reset Emu. All of them reminded Emu again who they were and then Kenzaki appeared. But Emu avoided Kenzaki immediately and claimed that he is not the 'real' Kenzaki Kazuma. As the other confused, the real Kenzaki Kazuma showed himself. Also showing that the real Kenzaki Kazuma was truly alive with the mirror reflection. The reset Emu finally regained his memory again completely as he slowly telling the Riders that the 'fake' Kenzaki Kazuma was his and Kiriya's mortal nemesis, Kamen Rider Genm aka Kuroto Dan.

Laughing in horror, Kuroto finally revealed his true identity and his true motive that he actually used the death Riders to have their hope turned into despair to be absorbed for his own resurrection. He soon absorbed the despair energy from the four Riders. But, his happiness is short lived as Kenzaki's appearance means the destruction of the game world that Kuroto's created for his own good. Kenzaki mocked Kuroto that he made the biggest mistake ever by copying him and his ability to use Undead's power means attracting him as Kenzaki himself is an Undead and the worst, Joker which will destroy the world.

Vexed, Kuroto finally summoned his troops and transformed into Genm Zombie Gamer Level X. The Riders (the five Riders and Ex-Aid Maximum Gamer Level 99) fought him and his troops well and managed to corner him until he absorbed his created last boss bugster. Pinched, Ex-Aid finally gave the five Riders the cards to transform into Kamen Sentai Gorider. They transformed into their respective color and Baron took the lead as Akarider. With the combined force of the Goriders and Ex-Aid, Kuroto was defeated for good with the Gorider Ball and Gorider Bazooka attacks. Genm soon self destruct himself alongside the Riders, however Lazer and the other dead three Riders quickly put an end to him and themselves to save Blade and Ex-Aid. Maze 3: Gorider Forever

Kamen Rider Another Agito appears as a toy, when Sento and Sougo they find Ataru he brings them to his room which is filled with Kamen Rider memorabilia, with Sougo and Sento stunned to see toys of themselves. Ataru reveals that Kamen Riders are fictional. Kamen Rider Heisei Generations FOREVER

Kamen Rider Another Agito appears as a playable character with the other Heisei and Showa kamen Riders in Kamen Rider Riderbout. 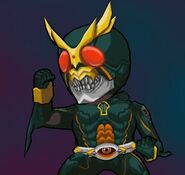 Kamen Rider Another Agito is a playable character in Kamen Rider Buttobasoul.

Kamen Rider Another Agito appears as a playable character in this trading card game with other Kamen Rider Kamen Rider Heisei-Era , Showa-Era,super sentai,Metal Heroes and other Heroes.

Kino transforms into a twisted and grotesque version of Agito. Despite having access to only one form, Another Agito has excess to incredible strength and agility, exceeding Agito' Trinity Form. Similarly to Gills, Another Agito can open his faceplate to reveal a pair of jaws.

Another Agito is armed with serrated appendages called Bio Claws that extend from the forearms and calves. On one occasion, Kaoru also stole G3-X's GM-01 Scorpion handgun. Gills' Howl

Kamen Rider Another Agito has the following parts:

Another Agito's finisher is the Assault Kick, a flying kick performed in an identical fashion to Agito's Rider Kick. He is also capable of performing an unnamed Rider Punch. Maze 3: Gorider Forever

Mido-Rider is composed of the following parts:

Retrieved from "https://kamenrider.fandom.com/wiki/Kaoru_Kino?oldid=586251"
Community content is available under CC-BY-SA unless otherwise noted.