A movie for Kamen Rider Zi-O

For the song that this film is named after, see Over "Quartzer".

. Set in an alternate timeline to the series while serving as a tribute to Kamen Rider Drive and the entirely of the Heisei-era, Sougo comes face to face with Quartzer, a group which intends to wipe Kamen Rider Drive from history and conspire against his kingship. Ahead of his in-series debut, the film features an early-bird appearance of Kamen Rider Zero-One, the first Rider to helm the Reiwa-era.

The catchphrases for the movie are "The Final Chapter of Heisei Kamen Riders" (平成仮面ライダー、最終章。, Heisei Kamen Raidā, Saishūshō.) and "Break through the Eras, Change the Future." (時代を壊せ、未来を変えろ。, Jidai wo Kowase, Mirai wo Kaero.).

Sougo and his friends end up in 16th century Japan during the legendary battle between Oda Nobunaga and Takeda Katsuyori after being approached by Go Shijima to prevent the erasure of Krim Steinbelt and Kamen Rider Drive from history. As Woz reveals himself to be a member of Quartzer, a group of time traveling observers, the truth behind Ohma Zi-O becomes clearer...

Sougo Tokiwa awakens from a dream of seeing a yellow Rider with a grasshopper motif, panicking that this new Rider had taken his place as Demon King.

Soon afterwards, Sougo, Geiz, Tsukuyomi, and Woz receive a call for help from both Go Shijima and Krim Steinbelt, who plead for the four to go back in time and protect Krim's ancestor from being killed, which would result in Drive's history disappearing in the process. The team would follow through this request and travel to 1575, during the prelude from the famed Battle of Nagashino. Sougo and Geiz infiltrate Oda Nobunaga's ranks, but Geiz ends up taking Nobunaga's place as Nobunaga runs off and tries to court Clara Steinbelt. Discovering her identity as Krim's ancestor, they move in to protect her from being attacked by Kamen Rider Zonjis and Kamen Rider Zamonas.

As the Battle for Nagashino began, a cowardly Nobunaga pleads Geiz to take his place, which he does. The Nobunaga army wins as history tells, but Geiz later calls Nobunaga out for "changing history". Sougo decides to let Nobunaga do what he wants, as this was "his present". He compares this to when Geiz and Tsukuyomi first came to his timeline, where they were sure Sougo would inevitably become Ohma Zi-O. But with the future having been proven possible to be changed, Souga refraines from forcing Nobunaga into a role he doesn't desire.

After delivering Clara Steinbelt back to her lover Pietro, the team return to 2019, where Krim and Go wait for them and give Sougo the Drive and Mach Ridewatches. However, Woz steals the Ridewatches and presents them to his "true" leader, SOUGO Tokiwa. As a member of Quartzer, it's their job to control all of history to SOUGO's demands, while essentially making Sougo a "kagemusha" of the true SOUGO. SOUGO transforms into Barlckxs and defeats Sougo, later confining him in prison.

An imprisoned Sougo angrily asks why Woz betrayed him, which he responded that his true loyalty always lied with SOUGO before leaving, saying he was proud to have called Sougo his "king" before he departs. Sougo then spoke to another inmate, Takeshi Kinashi, who tells Sougo to owe up to his destiny as the "chosen one". An enraged Geiz later arrives and fights Woz, attempting to convince him to return to them. This served as a distraction to allow Tsukuyomi and Go to release Sougo.

Sougo faces Barlckxs again, but he's easily defeated once more as Barlckxs claims that the power of the Heisei era can't affect him. In the middle of the city, SOUGO declares his true goal: through the Ridewatches in his possession, he'd unify the Heisei era, which was broken in unconnected and unfitting settings, rebuilding everything in a unified world view under his control. With the Dai Mazines activating, a singularity is created and everything from the Heisei era of the current world begins being absorbed into it. The first step before the birth of his new world, and even Sougo is pulled towards it.[3]

However, after losing consciousness, Sougo wakes up in a strange dimension instead of perishing. Witnessing past memories of himself as a child, playing with his parents, Sougo watches as his younger self declares that he'll become a king in the future. In the end, these memories turn out to be little more than illusion, as Sougo suddenly appears in a deserted wasteland in 2068. Once there, he is greeted by Ohma Zi-O himself. The future demon king explains that SOUGO's claims are true, and Sougo was never born to be king. In spite of that, his dream leads Sougo to become Ohma Zi-O. Sougo chooses to embrace his dream, even if he wasn't born to do it.

Awakening back in the present, Sougo declares that he wants to be king to help the world, not to rule over it, when the Ohma Zi-O Ridewatch materializes in his hand. Sougo transforms into Zi-O OhmaForm as a gigantic projection of Ohma Zi-O appeared behind him. Witnessing this, Woz makes a grand speech about Zi-O OhmaForm being the advent of a new history that wasn't in his book. Finally, Zi-O landed in front of Zonjis and Zamonas.

Zi-O OhmaForm's arrival is followed by Go Shijima recovering his powers and all main Heisei Riders reappear to join the battle against the Quartzers. Riders also start materializing from alternative dimensions, such as games (The Goriders), theater posters (Kamen Rider Zangetsu Kachidoki) and even manga (Kuuga). They all help fight the army of Kasshines that appeared across the city. Witnessing Sougo’s quality as the one true king, Woz renounces his Quartzer membership in front of SOUGO, before he tears his Ohma Advent Calendar apart, stating that history is not set in stone, and that his allegiance belonged to the Heisei Riders.

With the destruction of his beloved book, the pages fly into space and alter the singularity's functions. The Dai-Mazines that appeared in space quickly lose their power source and fall like meteors to the ground, with all 19 previous Heisei Kamen Riders transforming into their final forms.

Just as Woz revels in the Heisei Riders victory, Barlckxs throws his Revolcane and fatally wounds Woz. Geiz then appeared to support Woz and declared for everyone to stand with their True King. Witnessing Zi-O OhmaForm gallantly battling with Barlckxs and succeeded in destroying the remaining Dai Mazines, Woz passed away. The Heisei Riders also successfully defeat Zonjis and Zamonas. Cornered, Barlckxs then uses Kamen Rider Black RX BioRider and J's Ridewatch to transform into a liquefied giant and attacking all Heisei Riders present. However, Sougo remains defiant. He, with all the main Heisei Riders, then use their combined Rider Kicks and penetrate Barlckxs last shield (a gigantic, liquefied board), dealing the finishing blow. In disbelief, Barlckxs shows the damaged board, now imprinted with Heisei in Kanji before exploding, killing the Leader of Quartzer for good.

With the defeat of Barlckxs, Geiz and Tsukuyomi disappeared because the future is now unknown. In spite of that, they're happy because it means they accomplished their mission. The other Quartzer reappear before Sougo Tokiwa, asking if he is fine with the world as it is, disjointed and lacking unity, and he replies that he is fine with it because life is like that. They tell him they're interested in seeing how his future will turn out.

When returning home, Geiz, Tsukuyomi and Woz are mysteriously restored, waiting for him.

Zero-One fends off the Kasshines and defeats Zonjis using Flying Falcon, putting an end to his ambitions. 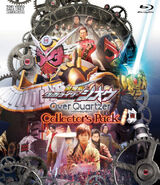