Deneb
(Vega Form)
Add a photo to this gallery

Plat Form (プラットフォーム, Puratto Fōmu) is Zeronos' most basic default form undersuit, which is briefly seen during Zeronos' transformation sequence before the Altair Form (or the Zero Form) armor attaches.

Altair Form is the default form of Zeronos, using the Zeronos Cards to evoke the change. It is named after the star Altair in the constellation Aquila the Eagle. The "mask" is made up of two green bull's head-shaped visors, the same motif as ZeroLiner Drill, which is based on the mythological occupation of Altair as a cowherd. These form from two bull's head-shaped train cars that ride along the tracks on Zeronos' helmet. The rest of the body has a set of converging train tracks that are almost like a zipper. Altair Form has generally balanced abilities comparable to Den-O's Sword Form. When Yuto becomes Altair Form, he says, "I'll tell you this for starters…" (最初に言っておく…, Saisho ni itte oku…) followed by something that concerns Yuto's strength or how annoyed he is. After using the Red Zeronos card, Yuto's own memories were used to cause Altair Form to "rust", changing it into Zero Form, although the future Yuto Sakurai is still able to assume Altair Form. In the final fight, Yuto once again uses this form using the last of the original Zeronos cards. Later during the investigation of Negataros, Yuto returns with a new set of Zeronos cards, able to assume Altair Form once again.

Vega Form is the form of Zeronos that comes from being possessed by the Imagin Deneb. It is named after the star Vega in the constellation Lyra the Lyre. It has a series of cannons on its shoulders called the Zeronos Nova (ゼロノスノヴァ, Zeronosu Nova). In the process of transforming into Vega Form, Deneb's body makes up various aspects of the form: his face is on Vega Form's chest, his hands form the Zeronos Nova, and his cloak becomes the cape. The "mask" is made up of a spool of thread, as Vega is a weaver, that opens up into a star shape. Vega Form is physically stronger than Altair Form, although suffers a loss of speed and overall agility. Whenever Deneb possesses Yuto to assume Vega Form, he says "I'll tell you this for starters…" (最初に言っておく…, Saisho ni itte oku…), following with a honest fact that annoys both the opponent and Yuto. Vega Form is accessed for the last time during the final battle, playing a part in the destruction of the Death Imagin, although Yuto assumes the form once more in the fight against Negataros.

"Charge and Up!"
―Transformation announcement[src]

Zero Form is a form of Zeronos that Yuto can assume, visually similar to Altair Form, but with a red color scheme (in place of Altair Form's green parts) and golden trimmings. After Yuto used the first Red Zeronos card, it used his own memories as a catalyst to cause the green portions of Altair Form to rust dramatically, turning them red and giving the armor a rustic-like texture while increasing its capabilities. As he did with Altair Form, Yuto can now assume Zero Form on his own, with access to the Denebick Buster. Zero Form is lost when Yuto is defeated by the Death Imagin using his last Red Zeronos card, but is later regained through unknown means in time to aid the DenLiner crew against Shiro and the revived Imagin. Possibly because memories of him are being made in the present time. Unlike his other two cards, when the Zero Form card is inserted into the belt, it will exclaim "Charge and Up". 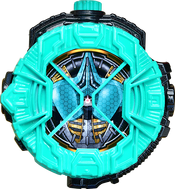 Retrieved from "https://kamenrider.fandom.com/wiki/Kamen_Rider_Zeronos?oldid=568413"
Community content is available under CC-BY-SA unless otherwise noted.