View source
watch 01:54
Obi-Wan Finale - The Loop
Do you like this video?
Play Sound

I'm the President and a Kamen Rider

Kamen Rider Zero-One (仮面ライダーゼロワン, Kamen Raidā Zerowan) is a Japanese tokusatsu drama in Toei Company's Kamen Rider Series. It is the first series to debut during the Reiwa period and the thirtieth overall. The series premiered on September 1, 2019, joining Kishiryu Sentai Ryusoulger

on March 8, 2020. After Kamen Rider Zero-One concluded on August 30, 2020, Kiramager was joined by Kamen Rider Saber in the Super Hero Time block.

The catchphrase for the series is "There's only one strongest company president in the world! And It's me!" (世界最強の社長はただひとり！オレだ！, Sekai saikyō no shachō wa tada hitori! Ore da!).

Development for the show had begun during the summer of 2018.[1] Producer Takahito Omori had visited several technological institutes and spoke with many professors and experts on the topic of artificial intelligence. The suit's design was completed in time before the Reiwa-era change, but a name had not been decided on yet. Omori came up with the idea of "Rei-One", which was a shortening of "Reiwa's first Rider." It was later pointed out that "rei" could also be read as "zero", and that there was already a superhero named Kikaider with the "01" moniker. With the show being heavily-themed in technology, the name "Zero-One" was chosen as a reference to binary code and the trademark was filed on April 19, 2019.[2]

From this time until May, head writer Yuya Takahashi had completed the scripts for the first two episodes, while auditions for the cast were held. Filming began in mid-June 2019, and the cast were introduced through a scheduled press conference in July. The series premiered on September 1, 2019.

As a result of the ongoing COVID-19 pandemic, a state of emergency was declared in Japan on April 16, 2020[3], which delayed the broadcasting of new episodes following the airing of Superhero Time on May 10, 2020, which included Episode 35 of Zero-One and Episode 10 of Mashin Sentai Kiramager

. Ultimately, the release of Kamen Rider Zero-One: REAL×TIME which was originally scheduled to premiere that summer, was postponed until December in place of what would have been the premiere slot for the potential Movie War film between Zero-One and Kamen Rider Saber.

Further filming was temporarily ceased after the conclusion of Episode 39's production. Due to Toei accelerating the production speed of Kamen Rider Saber, Zero-One was given an episode count of 45, which forced the production crew to make several script alterations to fit the reduced episode count.[4]

To allow time for the production team to rewrite scripts, a series of recap episodes were aired for five consecutive weeks from May 17, 2020, to June 14, 2020: the two-part "President Special", focusing on Aruto and Izu, the "Shooting Special" focusing on Isamu and Yua, and the two-part "Super Work War" focusing on the Humagears throughout the series. At this time, Japan's government had lifted its state of emergency on May 25, 2020, allowing Toei to resume filming Zero-One and Kiramager under newly placed guidelines to control any further spreading of the COVID-19 virus.[5] The series resumed broadcasting full-length episodes on June 28, 2020 starting with Episode 36.[6] Filming wrapped up on August 4, 2020 and the finale aired on August 30, 2020.

"Humagears, robots equipped with artificial intelligence, offer direct job support in our day and age. A young president of a technology company specializing in A.I. technology fights to protect the dreams of others!"
―Opening Narration Episode 1-28, 42-44[src]

"Humagears, robots equipped with artificial intelligence. Will they bring hope or despair to humanity? A young president of a new company specializing in A.I. technology fights to bring his dreams to life!"
―Opening Narration Episode 31-41[src]

Humagear, created by the leading company for A.I., Hiden Intelligence, serve humanity's every convenience. But a cyber-terrorist organization begins hacking the Humagears in a conspiracy that turns them into monsters. Aruto Hiden has taken over at Hiden Intelligence, and along with the CEO's post, he also takes over the responsibility for Kamen Rider Zero-One by using his company's technology. Aruto tries to keep the peaceful world between humans and Humagears with his Humagear secretary, while A.I.M.S., a military squad, pursues the terrorists![7]

The series is divided into four story arcs:[9]

Each Japanese episode title includes a pronoun written in katakana instead of hiragana. They also include puns and references to Aruto's own speaking style and jokes. The English titles are taken from Shout! Factory's website.[10][11]

"There Is Only One Person Who Can Stop You, And That's Me! ~Find A New Life"

"Henshin! Zero-Two～Now is the right time 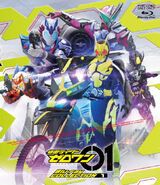 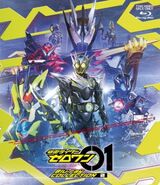 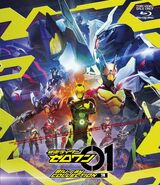 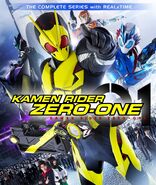