Kamen Rider Skull (仮面ライダースカル, Kamen Raidā Sukaru) may refer to any of the following characters.

Father Roberto Shijima
Add a photo to this gallery

Kamen Rider Skull Crystal (仮面ライダークリスタルスカル, Kamen Raidā Sukaru Kurisutaru) is the incomplete form of Skull that first appears in the events of Kamen Rider × Kamen Rider OOO & W featuring Skull: Movie War Core. It differs from Kamen Rider Skull's standard form in that the helmet is iridescent and it lacks the S-shaped "crack". Skull Crystal is able to attack by releasing energy from his chest in the shape of a large purple skull that can bite opponents. This form is named after the crystal skulls.

With the use of the Lost Driver and the Skull Memory, Sokichi transforms into Kamen Rider Skull. Skull is unique in that besides wearing a white tethered scarf he also wears a white fedora. It is revealed that he was the original user of the quote "Now, count your crimes!" (さあ、お前の罪を数えろ！, Sā, omae no tsumi o kazoero!), a quote now used by his successor. Skull's motif is that of a human skull and the letter S. Like Skull Rider, Skull appears to be a homeage to Skull Man, Shotaro Ishinomori's previous creation, who was adapted for the creation of Kamen Rider 1. Kamen Rider Skull's primary finisher is the long range shooting attack Skull Punisher (スカルパニッシャー, Sukaru Panisshā), the Maximum Drive ability of his Skull Magnum. In Skull: Message to Double, Skull is shown to have a second Maximum Driver, known only as Finisher Kick (必殺キック, Hissatsu Kikku), that involves releasing a giant energy skull from his chest, which stuns the opponent and knocks them back before rising into the air. Skull then puts the Skull Memory into the Maximum Drive Slot, jumps up, and does a roundhouse Rider Kick, which propels the energy skull toward the opponent, whom it bites down on. Kamen Rider Skull also appears as one of the Kamen Riders summoned by Kamen Rider Diend's Complete Form and his Gekijouban Card. In this appearance, his Maximum Drive attack is a generic Rider Kick, similar to Rider 1's famous somersault and kick attack, but with a purple swirling energy around Skull's right foot. In Ganbaride, the name of Skull's generic Rider Kick is Silhouette Kick (シルエットキック, Shiruetto Kikku).

The Lost Driver is Skull's transformation belt. Sokichi received this from Shroud to combat Dopants easier. It is similar in design to the Double Driver used by Double, except for having only one Memory slot.

Skull Memory: The Skull Memory, also called the Skeleton Memory, is the Gaia Memory used for the transformation into Kamen Rider Skull and for Maximum Drives. When placed in the Maximum Drive slot, it performs a Finisher Kick, and the Skull Memory can also be used in conjunction with his Skull Magnum.

The Skull Magnum is a firearm similar to the Trigger Magnum in Maximum Mode used by Double. It is gained through the power of the Skull Memory its Maximum Drive called the Skull Punisher which blasts the opponent with powerful rapidfire shots.

Skull also has a modified Honda CBR1000RR motorcycle similar to Double's HardBoilder, but all black in color and with half of the "W" symbol (which makes it the "S" symbol) painted silver, to represent Skull's Lost Driver. It is armed with a series of guns called the Universal Launchers (ユニバーサルランチャー, Yunibāsaru Ranchā).

The SkullGarry (スカルギャリー, Sukarugyarī) is a tank/garage that holds the SkullBoilder. It was created by Shroud and the vehicle later becomes Kamen Rider Double's RevolGarry after extensive redesigning. The SkullGarry only appears in the Kamen Rider Skull: Message for Double portion of Kamen Rider × Kamen Rider OOO & W feat. Skull: Movie War Core.

Skull as summoned by Diend Complete Form.
Add a photo to this gallery

Skull Lockseed
(locked & opened)
Add a photo to this gallery 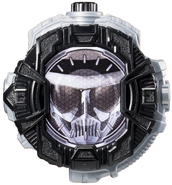 Skull Ridewatch
Add a photo to this gallery

Retrieved from "https://kamenrider.fandom.com/wiki/Kamen_Rider_Skull?oldid=702385"
Community content is available under CC-BY-SA unless otherwise noted.