Kamen Rider Scissors (仮面ライダーシザース, Kamen Raidā Shizāsu, 6): One of the Riders who fight in the Kamen Rider Trial of the World of Ryuki, Scissors is a cheating Rider who uses the power of his Contract Monster Volcancer. He is labeled by the Atashi Journal to have a victory rate of 6.8%.

He is later removed from the trial by Knight's Final Vent. Battle Trial: Ryuki World 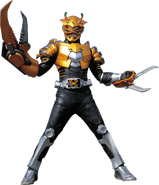 One can transform into Kamen Rider Scissors using an Card Deck and V Buckle upon forming a contract with Volcancer. His Visor, the Scissorsvisor (シザースバイザー, Shizāsu Baizā), is a claw-equipped gauntlet on his left arm that also functions as his personal weapon. Scissors' jumping height and running speed are identical to Ryuki's, but his kicking power is lower in exchange for a slightly higher punching power.

Through the use of his Strike Vent Advent Card, Scissors can arm himself with the Scissorspinch (シザースピンチ, Shizāsu Pinchi), an arm-mounted claw derived from Volcancer's left pincer. His Guard Vent equips him with the Shelldefense (シェルディフェンス, Sheru Difensu), a shield derived from the armor plating on Volcancer's back.

This form consists of the following parts[2]:

This form is exclusive to Decade Episode 6.

that appeared in Kaizoku Sentai Gokaiger