Kamen Rider Saber: The Phoenix Swordsman and the Book of Ruin

Kamen Rider Saber: The Phoenix Swordsman and the Book of Ruin

A movie for Kamen Rider Saber

, that was pushed into the Spring of 2021. In the film, Touma and his allies face off against an immortal swordsman from the past who wishes to bring ruin to the world. The film's post-credit scene features an early-bird appearance from both Master Logos and the Southern Base ahead of their in-series debuts.

Ticket pre-sales began on November 8, 2020, with online purchases including digital downloads of episodes of both Zero-One's anime and Saber's anime. Both films premiered side-to-side in Japanese theaters on December 18, 2020.

"This is bad! Bahato has unleashed the Book of Ruin! I thought Bahato was sealed away in a book for being the most dangerous, immortal swordsman! If this goes on, Wonder World will be destroyed! And by that I mean... the real world will cease to exist!"
―Tassel[src] 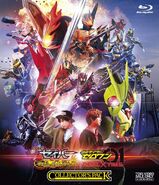