Chapter 1: In The Beginning, There Was a Flame Swordsman.

Kamen Rider Saber (仮面ライダー, Kamen Raidā Seibā) is a Japanese tokusatsu drama in Toei Company's Kamen Rider Series. It is the second series to debut during the Reiwa period and the thirty-first overall. The series premiered on September 6, 2020, joining Mashin Sentai Kiramager

. After the finale of Kamen Rider Saber, Zenkaiger was joined alongside Kamen Rider Revice in the Super Hero Time block.

The catchphrase for the series is "Become a writer and a swordsman!!" (文豪にして剣豪！！, Bungō ni shite kengō!!)

The series motifs are swords, knights, and books.

Twelve Kamen Riders of varying alignments have appeared throughout the series. The concept of battle royales between multiple Riders has been done in the past, like Kamen Rider Ryuki. As revealed in the 284th issue of Figure-Oh Magazine, the original proposed drafts had a vastly different story, where the members of the Sword of Logos were originally at odds with one another, with each Swordsman located in different areas around the world. Touma, a lone traveler akin to Soji Tendo, would have had to embark on a "road trip" and encounter each of the other swordsman while deepening his bonds with them before their final battle against Storious. From the start, Touma would have already been an experienced swordsman and had all of his missing memories involving Luna. Thus, his novel writing and swordsmanship training would be driven solely for the sake of finding Luna and not for his love of books or whatsoever. This would lead to him being an extremely powerful Rider from the start.

However with the arrival of COVID-19 in the real world, a conscious effort was made to avoid infighting between Riders as much as possible, with the role of killing another Rider being delegated to Kamen Rider Calibur only. The storyline of Zero-One was science-fiction and noticeably mature, so the nature of Saber veered towards the fantasy direction and its narrative was changed to introduce more "brighter" storylines while attempting to appeal to the younger children who may not have understood or were as deeply invested into the complex and dark storyline of Zero-One as older audiences were. Like Kaizoku Sentai Gokaiger

which premiered in the same time frame as the 2011 Tōhoku earthquake and tsunami, Saber was developed to resemble a Sentai team who fought to "escape the crisis together."

Filming had begun while the staff from Zero-One were also still filming material to fill their now-45 episode quota, which was originally at 41. With the country in lockdown, certain locations such as Shibuya Crossing became off-limits from filming. As such, it led to the creation of on-studio sets such as Fantastic Bookstore Kamiyama and the Northern Base to make up for the inability to film elsewhere. Moreover, the Megids' abilities to terra-shift certain parts of the city to a different area was added to allow the production team an excuse to film around Toei Studios.

Although the pandemic had inhibited certain traditional filming methods originally meant for Saber, a new method had arose. Background scenes were shot on location with a small number of staff on site, and actors are safely in the studios while their image is superimposed with a green-screen onto the background that is being filmed in real time. This was done to reduce the workload for the special effects team, while saving money by not having to constantly transport actors across the country and prevent COVID infections on set. Certain scenes in Wonder World were also not physically filmed but instead animated by Unreal Engine.

To purposely fill broadcast time, characters such as Tassel was introduced, and in-between commercial breaks featured longer eyecatchers. Furthermore, Saber was unable to appear in a Movie War film with Zero-One, with the typical premiere slot being given to each series' individual but unrelated films.

Toei Company confirmed and filed the trademark for Kamen Rider Saber on May 29, 2020.[2]. On July 29, 2020 the show's logo was fully unveiled during the press conference introducing the main cast of the show, as well as revealing Takuro Fukuda as the main scriptwriter and Tokyo Ska Paradise Orchestra as musical artists. [3] By accounts of the cast and staff, filming wrapped on June 25, 2021[4][5].

Long ago, a sect of swordsmen known as the Sword of Logos protected the Almighty Book, a powerful tome of history that contains everything known to man; myths, creatures, stories, science, technology, and the evolution of human civilization. However thousands of years ago, a traitor working for the Megid tried to steal it for himself. As a result, the Book vanished and each of its pages scattered across the world.

Fast-forward to present day, young novelist Touma Kamiyama has been having dreams of another dimension where he witnessed swordsmen and monsters coming out of a storybook, and a "mysterious girl" calling for help. Recalling the dream sends chills down his spine, not knowing anything at all. One day, a strange phenomenon occurred without notice; a part of the city had disappeared. As people's loved ones disappear one after another, it sends the entire nation into chaos.

The vanished part of the city appeared in an alternate dimension, called Wonder World, an endless dimension as big as pages from a book. The dimension is home to magical creatures that attack without hesitation, sending the people in fear and confusion. As Touma and Mei are caught in this phenomenon, the attack reminds Touma of his dream as he is attacked by a mysterious monster.

"I will definitely bring the city back to the original world!"

As if it was responding to his very will, Touma harnesses the power of the Red Dragon as it merges into his body, turning him into the Flame Swordsman. The battle between the real world and Wonder World has an ending, and only Touma can write it as the fate of the world falls into his hands.

Similar to numerous Super Sentai series, this is the second series to use a special nomenclature for its episodes, after Kamen Rider Hibiki. In this case, the episodes are called "Chapters" (章, Shō), the crossover episode with Zenkaiger being called the Special Chapter (特別章, Tokubetsushō), and the second-to-last episode being called the Final Chapter (最終章, Saishūshō), with the season finale instead being labelled as "Special Issue" (増刊号, Zōkan-gō).

The names for the episodes are also written like descriptive sentences, along with being broken by commas, and ending with periods. The visual effect on the title is that of an opening book, and the font used has an ancient tale aesthetic. 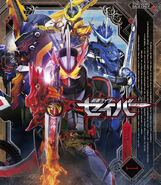 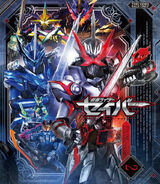 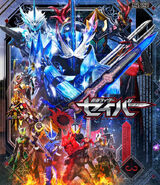