Appearing in a mock-up of a Smart Brain Autumn sales catalogue, the Pyron Gear is said to belong to the Omicron Series, meaning it was developed from the Riotrooper Rider Gear. Described as a "sports model", It was apparently intended for civilian recreational use, and optionally comes with a motorcycle called the Gyro Tourer, a modified version of the Gyro Attacker. The Pyron Gear comes in three colors: Grand Prix Blue, Sonia Red, and Midnight Black. Though the official description mentions no weapons, a modified version of the Riotrooper's Axelaygun can be seen on its left hip.

In addition to being a play on the Greek letter Pi (π), the name "Pyron" is derived from the Chinese, Vietnamese and Korean Pái Lóng (Chinese: 白龍; Vietnamese: Bạch Long; Korean: 백용, Baeklyong), meaning "White Dragon", which can be seen written on the Pyron's right thigh. 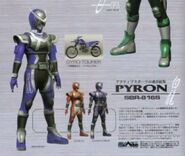 As shown on Uchusen Vol.109