"Dual Up! Get the glory in the chain! Perfect Puzzle!"
―Transformation Announcement[src]

Para-DX's Puzzle Gamer attack style is to manipulate the Energy Items on the field. He can reveal the hidden Energy Items and choose the best Energy Items that suits him depending on the situation he is in. He is also able to generate puzzle piece-styled energy shields to deflect enemy attacks.

The main tool of Para-DX in this form is the Materialize Smasher (マテリアライズスマッシャー, Materiaraizu Sumasshā), which was Puzzle Gamer's shoulder parts. These gauntlets can throw powerful punches of fire.

As shown in Episode 18, when Parado is truly angered and full of rage, his attack power and attack speed, along with the destruction by the attacks are further enhanced.

This form's finisher is the Knock Out Critical Smash (ノックアウトクリティカルスマッシュ, Nokkuaoto Kuritikaru Sumasshu): Para-DX does a flaming uppercut to enemy, sending him into the air, before punching the enemy again with great force, empowered by fire from his gauntlet, once the enemy has fallen back into punching range.

In this form, despite Para-DX's stats are slightly lower than Ex-Aid's Level 99, his amazing combat skills fill up the gap, making him on par with Ex-Aid and easily towering all the other Riders in every stat, including some Riders that have the stats of Level X.

As the form's name suggests, this form combines the brutal strength of Knock Out Fighter and the defensive abilities of Perfect Puzzle, along with being able to use the Energy Items as well, making him a terrifying enemy to fight against.

Before it's debut, Para-DX Level 99 is briefly seen in the new opening sequence.

At first, this form cannot be accessed due to a Bugster cannot operate a Gamer Driver that are specifically meant for humans. However, thanks to Ex-Aid using his reprogramming ability on him, Parado can now use the Driver and Level Up into this form at ease.

This form has five finishers:

Double Fighter Gamer Level 39 (ダブルファイターゲーマーレベル39, Daburu Faitā Gēmā Reberu Sāti Nain) is Para-DX's special form accessed when Emu and Parado use the Knock Out Fighter 2 Gashat together, splitting a form between Ex-Aid and Para-DX similarly to Mighty Brothers XX. Para-DX's appearance in this form is identical to Fighter Gamer Level 50, baring a Gamer Driver and Gashats in a Kimewaza Slot Holder.

These forms are exclusively available to be simulated with Para-DX in the Level UP Rider Series toyline. 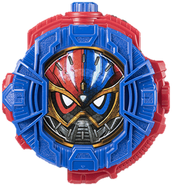 Retrieved from "https://kamenrider.fandom.com/wiki/Kamen_Rider_Para-DX?oldid=543109"
Community content is available under CC-BY-SA unless otherwise noted.