Kamen Rider Odin may refer to any of the following characters: 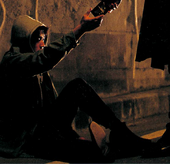 Kamen Rider Odin (Zi-O)
Add a photo to this gallery

Kamen Rider Odin is Shiro Kanzaki's representative in the Rider Fight. He is contracted to Goldphoenix. His Visor, the Goldvisor (ゴールドバイザー, Gōrudo Baizā), is a staff that can also hold all three Survive Advent Cards after the wings on its upper section are opened. When this is done, Odin becomes immortal. Odin's parameters are the highest out of all of the 13 Riders, including those in Survive Form. This was done by Kanzaki to ensure that Odin would win the Rider Fight and grant him his wish.

By using his Final Vent, Odin can execute his finisher, Eternal Chaos (エターナルカオス, Etānaru Kaosu), in which Goldphoenix picks up Odin in its flaming talons and throws him at the enemy. Another variation of the attack involves Goldphoenix charging itself up with golden energy and then ramming the target.

Guard Vent (AP: 4000): Conjures Gold Shield, a shield made from the Goldphoenix's tail

Steal Vent: Allows Odin to steal any weapon or defense object his opponent may have

Strange Vent: Allows Odin to use one random Advent Card

Survive Mugen: His Survive Card, the Odin's wing extended, two Survive Cards combine into one. Never used in Series or Movie.
Add a photo to this gallery

Retrieved from "https://kamenrider.fandom.com/wiki/Kamen_Rider_Odin_(Rider)?oldid=675091"
Community content is available under CC-BY-SA unless otherwise noted.