watch 03:27
Wiki Targeted (Entertainment)
Do you like this video?
Play Sound

Kamen Rider Leangle may refer to any the following characters. 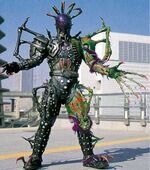 Titan Undead
Add a photo to this gallery

The Leangle system was developed Isaka, the Peacock Undead, who needed the sealed Spider Undead to complete it. However, it was later revealed that the Undead was not sealed properly and manipulated his users for his own agenda.

While never assumed in the series, Leangle's Jack Form (ジャックフォーム, Jakku Fōmu) can be seen in the manga and S.I.C. toyline. Leangle would theoretically assume this form by inserting the Absorb Tiger Rouse Card into the Rouse Absorber and scanning the Fusion Elephant Rouse Card. Unlike other Jack Forms, this form is not as maneuverable and lacks ability to fly, compensates with superior strength and defensive abilities.

Retrieved from "https://kamenrider.fandom.com/wiki/Kamen_Rider_Leangle?oldid=698324"
Community content is available under CC-BY-SA unless otherwise noted.