A movie for Kamen Rider Kiva

. The film opened at 4th place in the box offices during its opening weekend. [1]

King of the Hell Castle features two new Riders, the first of which was shown in silhouette in Japanese children's magazines, Kamen Rider Rey[2], who is a monster hunter named Takato Shiramine played by Shouma Yamamoto. He is partnered to Rey Kivat, voiced by Norio Wakamoto. The villain of the movie is Takashi Sugimura who is a death-row inmate and transforms into the black and horned Kamen Rider Arc, portrayed by Ken Horiuchi of the comedy troupe Neptune.[3] Arc is to be the tallest Rider without the use of powers at 3.2 m tall.[4][5] Also guest starring is Gal Sone, who plays a Medusa-like villainess named Sayaka who, among other creatures known as the Legendorga, aids Arc in his quest to rule the world. As part of the role, Gal Sone will show off her competitive eating skills.[6] Toshihiko Seki, Kōji Yusa, Masaki Terasoma, Kenichi Suzumura, Rina Akiyama, and Ryo Ueno of the Den-O cast are all to have cameo appearances in the film.

The story begins in 2008 as the Antlion Fangire begins to feed at an exhibit room until Megumi intervened as Nago arrives to slay the monster. However, during their struggle, the Mummy Legendorga suddenly resurrects and feeds on the humans before using his power to turn the Antlion Fangire into his slave to aid him in overwhelming Nago with the Arms Monsters watching the fight. While this occurred, Wataru Kurenai starts attending a local high school at Shizuka's suggestion after a welfare officer visited him and quickly befriends Natsuki Tsukue, who tries to get Wataru to join several clubs where he fails in each one while trying to ask her if she would like to start a violin club after hearing her play, she refuses out right.

Later that night, death row inmate Takashi Sugimura escaped from prison and the pursuing police officers by means of a dark power possessing him, with Nago going after him under advisement from Mamoru Shima to capture the fugitive with caution as he may be a Fangire. When Nago finds Sugimura, he chases the fugitive all the way to Wataru's high school and takes Natsuki hostage, but she is freed by the joint efforts of Wataru and Nago. However, the Medusa and Mummy Legendorgas appear to Sugimura's aid when he was being escorted back to jail, overpowering Ixa as Kiva arrives. They overpower the riders until another figure named Takato Shiramine appears, transforming into Kamen Rider Rey and driving the two Legendorgas off as they take Sugimura with them, waking him as their Lord.

At the cafe, as Shiramine explains the Legendorgas, Wataru finds that the current crisis started when Sugimura attempted to break out of jail by using the famous violinist Towa Sakakibara as a hostage in 1986 and broke the Legendorgas' seal. With this knowledge, Wataru asks the Arm Monsters permission to use Castle Doran's Time Door to go back in time to prevent Sugimura's actions. While trying to get Sakakibara to cancel her concert, he is stopped by Otoya who was convinced he was a Fangire and tries to beat him. After another attempt to talk to her, Wataru is attacked by Yuri after Otoya tells her about him as the police arrive to arrest Otoya on the impression he's the criminal. Forced to take Wataru in a stolen police car, Otoya is shocked when Wataru recognized him as his father. Wataru attempts to prove himself with his cellphone and money before he and his father are both sent to Kanto West Prison where Towa is to perform as Sugimura takes her hostage to escape. But Otoya knocks out a guard named Sanjou so he and Wataru can get out of their cell to save Towa and restrain Sugimura.

After Wataru returns to his time under the impression he succeeded, Sanjou turns out to be the Zebra Fangire that attacks Otoya before trying to kill Towa. But Yuri arrives to allow Otoya to kill the Fangire as Ixa, causing the chain of events where Sugimura escapes and uncovers the tomb of the Legendorga Lord, invoking the spirit within it. When Wataru returns to his time, he is targeted by people under the control of the Mummy and Medusa Legendorgas, with the Gargoyle Legendorga overseeing their attack. Luckily, Otoya and Yuri arrive to aid their future children, later bonding with them before Otoya reveals that Towa Sakakibara is the stage name of Natsumi Tsukue, Natsuki's mother. Otoya is enjoying the present and its perks after disguising Wataru so he wouldn't be attacked, meeting up with Shiramine before he is distracted by a young woman named Sayaka as Shiramine tells Wataru that Kiva's destruction will soon come as Sayaka reveals herself as the Medusa Legendorga.

Becoming Kiva to fight the Legendorgas, he summons Buroon Booster which he uses to destroys the Mandrake Legendorga as the Arm Monsters arrive to aid Kiva in fighting the remaining three in both their true forms and in their weapon forms. However, as his friends drive the monsters off, Kiva is attacked by Rey who reveals that he is on the Legendorgas' side as he then takes the Aso girls hostage. Later at the cafe, after Otoya plays Natsumi's song to help Natsuki finally accept her mother, Rey-kivat arrives with orders to take Wataru to the Legendorgas' castle. After knocking his father out, Wataru arrives at the castle and is brought before Sugimura, who reveals himself to be the vessel of the Legendorga Lord Arc who was defeated by the original Kiva and uses his power to force Wataru's Fangire blood to manifest into Kiva's Flight Style. Under Arc's control, Wataru is forced to have Otoya relinguish his Ixa Knuckle as Nago arrives to help. But once he loses his Ixa Knuckle, Yuri and Megumi arrive after freeing themselves and use their time-respective Ixa Knuckles to fight the Legendorgas with Otoya managing to snap his son out of Arc's spell as the Aso girls kill the Medusa Legendorga.

Enraged, Sugimura decides to kill Wataru as they both assume their Rider Forms as the Ixa Knuckles are returned to Otoya and Nago who fight the Mummy Legendorga and Rey, respectively. Nago eventually gets the best of Rey, destroying him with the Ixa Judgement, while Otoya eventually destroys the Mummy Legendorga, even though his Save Mode helmet is heavily damaged in the process. While this occurred, Kiva is forced to assume Emperor Form to deal with the larger opponent, weakening him enough so he can be defeated by both of the Kurenai family Riders. However, Arc absorbs the power of the Legendorga race by sucking the eye on the moon into himself to become Legend Arc to kill them. Kiva then transforms into Emperor Form's Flight Style to fight Legend Arc in a battle across the city, until Castle Doran comes to Kiva's aid, finally allowing Kiva to perform a Rider Kick with enough force to slam Arc into the moon, leaving a gigantic crater and destroying him for good. After everything returns to normal, Otoya performs alongside his son on their violins at Wataru's school before he and Yuri return to their time. Once they left, Wataru is joined by Natsuki as the two perform a duet.

Shortly after the credits, Ryutaros just finished watching watching this movie. Momotaros barges in mad because Ryutaros didn't wait for him. The two watch short cartoons films featuring the Taros themselves. Momotaros is mad of the outcomes because he was the one that always dies and Ryutaros always comes out on top. Ryutaros transforms into Go-On Red

and Ixa during the shorts. Kintaros and Urataros come in and say they just solved the theater mystery.

On June 2, 2008, Toei announced on its various official websites that there would be a series of short five-minute internet movies that are spin-offs of both King of the Castle in the Demon World and Boom Boom! Bang Bang! GekijōBang!!

to be accessed by a mobile phone service. In the case of King of the Castle in the Demon World, the featurettes are called Net Edition: Kamen Rider Backwards-Kiva: Queen of the Castle in the Demon World (ネット版 仮面ライダー裏キバ 魔界城の女王, Nettoban Kamen Raidā Urakiba: Makaijō no Joō), the first webisode released on July 11, 2008. In these shorts, Otoya and Yuri are brought into the present by Castle Doran when the mysterious Queen of the Legendorga is about to be revived. The shorts themselves are all zany misadventures of everyone in the Kiva cast. In the end, the Legendorga Queen is revealed to be Shizuka, however in the battle's climax, it is revealed that the entire event was only a dream.[7][8][9] 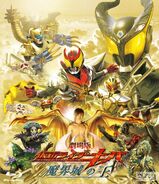