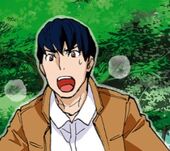 Kamen Rider Zi-O NEXT TIME: Geiz, Majesty
Full list of appearances
The Kaixa Gear was the third set of Kamen Rider Gear developed by the Smart Brain Corporation to protect the Orphnoch King. The Kaixa Gear was more powerful but slower than the Faiz Gear. It still did not match the Delta Gear for speed or strength but possessed greater functionality. Its power came at a price: while all of Smart Brain's Rider Gears were intended for Orphnochs only, the Kaixa Gear is the only set that will kill any users who drained all their Orphnoch DNA after donning it.

Its first known wearer is Kouta Takamiya, but the belt destroyed him when he burned up all of his implanted Orphnoch DNA. Two more Ryuseiji members were forced to use the power of Kaixa to protect the others from Smart Brain and paid for it with their lives. The suit's primary wearer is Masato Kusaka, who had a great deal more Orphnoch DNA implanted into him, but it began to run out near the end of the series. A weakened Kusaka had his belt taken by Kiba. After recovering his faith in humanity, Kiba as Kaixa joined Takumi and Mihara in battling the fully awakened King, but the Kaixa Gear was destroyed in battle.

In Paradise Lost, Masato uses the Kaixa Gear to destroy several Orphnochs in the city, later fighting Leo as Psyga at the human's "base" of Paradise, but he loses the belt and is killed. Keitaro then manages to use the Kaixa Gear after two doses of Professor Nomura's "Transform One-Shot" serum, defeating the Lion Orphnoch before the belt disintegrates, Nomura admitting that his invention only works "for one-shot".

Once transformation is completed, the Kaixa Armor has several key features in its design to protect protection to the user. Like all gear, the Kaixa armor manifests when the Kaixa Driver generates Photon Blood, a glowing substance generates the soft Sol Foam suit, Sol Metal armor, and Fullmetal Lung chest armor via traveling through the two yellow Photon Streams lines that gives Kaixa "greater strength at the cost of speed". The steams end at the Photon Terminals at the gauntlets and Power Anklet greaves, the right Anklet having a Energy Holster that the Kaixa Pointer can be connected it. The helmet is unique due to its Global Feeler antenna to link up to Smart Brain's networks and the X Finder visor that gives Kaixa incredible vision to see in darkness, giving the illusion of a glowing eye, and a limited amount of x-ray vision. 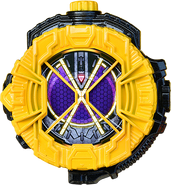 There is much confusion surrounding the Rider's name, as his design is based on the Greek letter Chi (Χ), and people have often mispronounce it as the Japanese kana "chi". The Greek letter Chi is actually pronounced "kie", as the Greek letter system originated in Europe, not Asia, so while there is a similar name and Romanization spelling, the pronunciation is entirely different.

The official transliteration is "Kaixa", although some would argue that the pronunciation is closer to "Kaiza" due to the katakana used. Other variations in his name include the following: