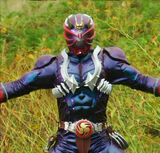 In this form, Hibiki is a purple demon. This is his basic form and the easiest form for him to reach. To become this form, Hibiki simply needs to tap his tuning fork against a solid surface, the vibrations from the fork causing his body to be engulfed in a fiery purple aura. Hibiki also gains a second "oni face" which is a crest that forms on his forehead. Unlike most Kamen Riders, Hibiki does not wear a suit, rather his demon form is his true form.

Hibiki's second form, also known as Hibiki Kurenai (紅, Hibiki Kurenai), was reached during the summer of training. It is exactly the same in appearance as his original form except that it is red instead of purple, and the face possesses a white plate-like mouth guard, with the "eyes" appearing black. Hibiki learned that he would be able to go beyond his basic form during the summer. At first, he was unable to reach this form completely, only able to transform his arms when under attack. This greatly drained him and caused him to begin tougher training.

After an attack by a group of Summer Makamou, Hibiki finally reached this form mid-battle. His body froze as red fumes raised up from the ground and caused his body to change. In this form, Hibiki's powers are all nearly doubled from that of his basic form. He can easily defeat many different types of Makamou with a single strike in this form.

The third and final form Hibiki was able to reach is known as Armed Hibiki (, Āmudo Hibiki). Unlike Kurenai Form that simply changes colors, the armor pieces of equipment here are much greater. To reach this form, Hibiki must use the Armed Saber, also serving as a weapon in this form. When initiating the call "Hibiki Sōkō!" (響鬼装甲, "Hibiki Sōkō!") then hits the button on the bottom of the Armed Saber, Hibiki automatically assumes Kurenai Form, then is wreathed in fire. Hibiki calls upon the power of the Disk Animals to fuse with him, each becoming armor for his form. Finally, his oni face is covered with a samurai-like shield, his horns expand, and the little oni face on his forhead is covered with the character for Armed, 甲. Hibiki is able to destroy most lower-leveled Makamou with little to no effort in this form.

Transforms Decade into Hibiki, used once before its power is sealed.「Rider War (episode)」 Its silhouette turned black after Hibiki's metamorphosis into Gyūki.「Idle Hibiki」 Regained after Asumu becomes Hibiki and Tsukasa learns the true meaning of the Ongekidō.「Ending Journey」

When Kamen Rider Decade is in his Complete Form, he uses the K-Touch to summon the Final Forms of the Nine Heisei Riders. After he presses the Rider's symbol, a card of that Rider's Final Form appears in a set of nine on Kamen Rider Decade's chest. The Hibiki Armed card summons Kamen Rider Armed Hibiki, armed with the Armed Saber. Using the Hibiki Final AttackRide card allows Decade to execute an Ongeki Ha: Kishin Kakusei-style slash alongside Armed Hibiki.

The Hibiki Ongekiko card transforms Hibiki into the Hibiki Akanetaka, a giant version of the Akanetaka Disk Animal.

With Hibiki Ongekiko, Decade performs the Decade Wave, where Hibiki Akanetaka transforms into the Hibiki Ongekiko and attaches to the target and allows Decade to perform his version of an Ongeki Da finisher using Hibiki's Ongekibou Rekka. 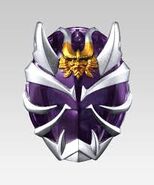 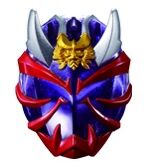 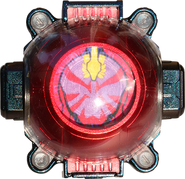 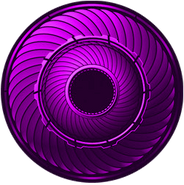 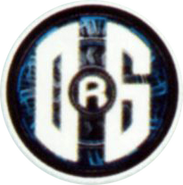 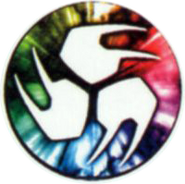 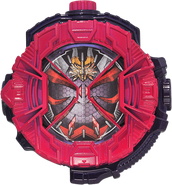 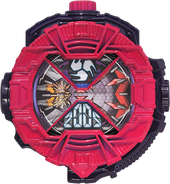 Armed Hibiki Ridewatch (アームド響鬼ライドウォッチ, Āmudo Hibiki Raidowotchi): Based on Kamen Rider Armed Hibiki, this Ridewatch would provide access to a corresponding Rider Armor. It is dated 2005, but shown on the Ziku-Driver's screen as FIN. 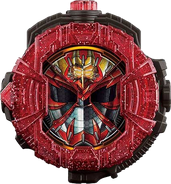 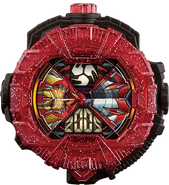 Another Hibiki Watch (アナザー響鬼ウォッチ, Anazā Hibiki Wotchi): A twisted version of the Hibiki Ridewatch used to transform into Another Hibiki.