Kamen Rider Ginga (仮面ライダーギンガ, Kamen Raidā Ginga) is an evil Kamen Rider seeking to conquer the entire universe. In 2019, he emerges from a meteor due to a distortion in the space-time continuum.

During the emergence of Another Kiva, a meteor fell from the sky and landed on a hill nearby. From there, Kamen Rider Ginga appeared and attacked everyone in sight, including the Time Jackers and even Another Kiva. As he proclaimed that he'll destroy the universe, Sougo, along with Geiz and Woz transformed into Zi-OTrinity to face him. However, Ginga managed to overpower Zi-OTrinity with little to no effort at all.

Seeing that Ginga's enormous power would do no good to both sides, Swartz suggested joining forces to take him down. However, even the combined might of the Riders and Time Jackers was not enough to overcome Ginga's overwhelming power. After Swartz and Woz managed to barely land two hits on him, dark clouds began to cover the sun. Ginga was turned into stone, immobilized, revealing that he was powered by the sun. Nevertheless, when the sky became clear again, Ginga returned to action and overpowered Woz and Swartz, along with Zi-O II and GeizRevive with ease. Another Kiva decided to offer assistance, and joined the battle. Although she was not powerful enough to take Ginga on, she managed to create an opening for a triple Rider Kick, which resulted in Ginga's defeat.

Ginga fled into space, leaving some of its essence in the form of the Ginga Miridewatch, which ultimately ended up in Woz's possession. Woz would later use this power to access his Final Form: GingaFinaly.

According to Tsukasa Kadoya, Ginga's creation is the result of the space-time continuum being distorted.

Kamen Rider Ginga is an evil powerful alien warlord, who can stop at nothing until he destroys the Earth, including humans themselves. Suddenly, Ginga is very chaotically evil, hateful, and arrogant. He was responsible for distorting time and space. He bested the Kamen Riders and the Time Jackers, forcing them to retreat. Later, he would be led to a hasty downfall for good.

Kamen Rider Ginga (仮面ライダーギンガ, Kamen Raidā Ginga) is an extraterrestrial entity with unknown origins. Due to being an entity from outer space, Ginga's armor and suit contains unknown substances. Ginga has the ability to shoot intense blasts of energy from his hands, allowing Ginga to overpower and defeat enemies without needing to engage in direct combat.

(Rough translation: Silver and Sparkling Galaxy! The fantasy from the edge of space!) 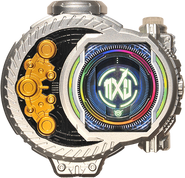 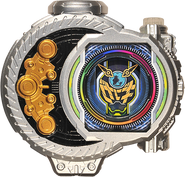 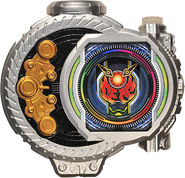 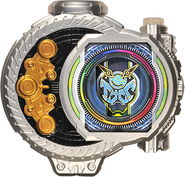 Ginga Miridewatch (Wakusei Mode)
Add a photo to this gallery

Kamen Rider Ginga is voiced by Tomokazu Sugita (杉田 智和, Sugita Tomokazu) who previously voiced Kivat-Bat the 3rd/2nd/4th in Kamen Rider Kiva and Demushu in Kamen Rider Gaim, and is later cast as the narrator of Mashin Sentai Kiramager

and voice the Kiramagers' Equipment

The name Ginga is a homophone of the Japanese word for 'Galaxy' (銀河, Ginga).

Retrieved from "https://kamenrider.fandom.com/wiki/Kamen_Rider_Ginga?oldid=682225"
Community content is available under CC-BY-SA unless otherwise noted.