Arata
(A.R. World)
Add a photo to this gallery

Masked Form (マスクドフォーム, Masukudo Fōmu) is a heavily armored form resembling a pupa. This is Gatack's default form, armed with shoulder-mounted guns to mow down any Worm unfortunate to stray in Gatack's line of sight in a hail of bullets specialized to kill Worms, until he opens up the horns on the Gatack Zecter, like a switch, to initiate the Cast Off (キャストオフ, Kyasuto Ofu) command.

Rider Form (ライダーフォーム, Raidā Fōmu) is the sleeker, faster, and more offensive form that closely resembles the stag beetle motif. In this form, Gatack has access to the Clock Up (クロックアップ, Kurokku Appu) command which allows Gatack to travel at near-light speeds to match the speeds of the Worms. By pressing a button three times on the belt in succession, Gatack can perform his tachyon-powered Rider Kick (ライダーキック, Raidā Kikku), a jumping roundhouse kick. Gatack also has a Rider Cutting (ライダーカッティング, Raidā Kattingu) attack, where he takes the Gatack Double Calibers and uses them to perform a scissor-like cutting attack.

Gatack's Hyper Form (ハイパーフォーム, Haipā Fōmu) was only seen in the Kamen Rider Kabuto Hyper Battle DVD Birth of Hyper Gatack. This form is capable of performing Hyper Clock Up to move at a greater speed than the regular Clock Up that even races through time and also allows Hyper Gatack to perform the Hyper Kick attack when his Rider Power is brought to the maximum, same as Kabuto's Hyper Form.

The only differences between his Rider and Hyper Forms in looks, is a bigger chestplate and larger Stag Beetle Horns on his helmet. When he activates Hyper Clock Up, his chestplate color turns from red to yellow.

A special bike designed for Gatack; it has two modes: Masked Mode and Ex Mode. In the latter configuration, which Gatack cannot ride in Masked Form, the bike becomes a surfboard-like vehicle which can fly very quickly and destroy multiple Worms with its mandibles. Also, with the Kabuto Extender present, a team finisher named the Extend Rider Drop can be executed. Tossed into the air off the Kabuto Extender's EX Anchor, the Gatack Extender is then driven into the enemy from above by Gatack's kick. 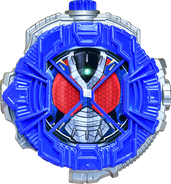 Gatack Ridewatch
Add a photo to this gallery
Retrieved from "https://kamenrider.fandom.com/wiki/Kamen_Rider_Gatack?oldid=621565"
Community content is available under CC-BY-SA unless otherwise noted.