Kamen Rider Wiki
Register
Don't have an account?
Sign In
in: Riders with more than one identity, Kamen Rider Blade, Kamen Rider Decade,
and 3 more

Ace Form (エースフォーム, Ēsu Fōmu) is the default form of Kamen Rider Garren assumed by using the Garren Buckle and Change Stag Rouse Card. The transformation fuses the user with the DNA of the Stag Undead. Though Garren possesses the weakest Ace Form, his long-range armament enables him to avoid direct confrontation.

Jack Form (ジャツクフォーム, Jakku Fōmu) is a combat extension of the Rider System which harnesses the power of Category Jack Rouse Cards via the Rouse Absorber. Garren assumes his Jack Form by inserting the Absorb Serpent into the Rouse Absorber and scanning the Fusion Peacock Rouse Card. This endows the Rider Armor with the attributes and characteristics of the Peacock Undead's DNA, enhancing Garren's natural combat capacities.

In this form, Garren gains golden reinforced armor plating which increases his resilience to enemy attacks. Garren also gains wings on his back, enabling him to fly. Assuming this form additionally upgrades the Garren Rouzer into its Empowered Type, which equips it with a bayonet and expands its AP cache.

While never assumed in the series, Garren's King Form (キングフォーム, Kingu Fōmu) can be seen in concept art and the S.I.C. Hero Saga toyline. Garren would theoretically assume this form by inserting the Absorb Serpent Rouse Card into the Rouse Absorber and scanning the Evolution Giraffa Rouse Card.

Due to having his Garren Buckle broken when he sealed the Giraffa Undead, Sakuya never had the chance to assume this form. Unlike Blade, this form would in theory only allow Garren to fuse with the Category King instead of all 13 Rouse Cards in the Diamonds Suit due to his his fusion rate being normal. Due to this, the Rouzer that Garren wields in King Form has storage for Rouse Cards.

This form is exclusive in Type16. - The Destroyer Destroys the Match!. 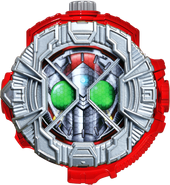